To paraphrase the late Rick James: "Outrage is a helluva drug."

In fact, the buzz it gives the self-righteous is impossible to kick.
Twenty years ago, the West Michigan town of Allendale erected a set of statues in a local park.
One depicts the end of the Civil War, and features a crestfallen Confederate.
So of course the statue smashers have descended on the town in full force.

Outsiders continue to pour into the rural town west of Grand Rapids to enlist in a battle being waged at protests, meetings and social media.

“I’ve seen more division and anger in our community than at any other point in my entire life. It breaks my heart,” resident Christina Berna said.

The battle lines in the festering dispute are murky. Most of the statue’s critics are white. Some of its defenders are black.

Wait, why would black people be defending it? The article successfully avoids quoting such interesting people, but here's a hint why: 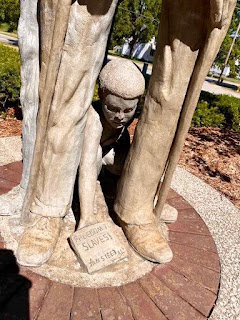 An interesting compositional choice from the artist, truly. What is sometimes lost in the great, horrific bloodshed between Union and Confederate is what the War meant to black people of the era, free and slave. Here, a former slave child picks up a Union leaflet stating that he is no longer chattel property.
So that helpfully explains why black residents would not be eager to see it pulled down by Woke Whites in another of their mindless iconoclastic frenzies.
I could quote the article's usual collection of Woke Whites and their so-called reasoning for It Will Come Down! but you've heard the emoting all before, and will again as they move on to the next target.
There's no reasoning with them, and it's not worth an effort. I'm certainly not going to waste any pixels on people who aren't interested in thinking.
The answer is No.
at July 21, 2020