[Editor's Note: this was posted in October 2018, the centenary of the Meuse-Argonne Campaign of World War I, an unjustly-forgotten episode of the heroic American soldier triumphing over not only a dogged, wily foe but also the rank incompetence of most of the commanding officers.] 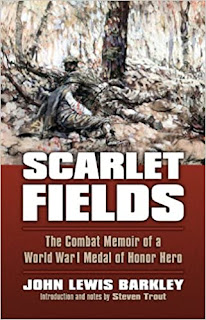 A century ago today, America was in the midst of the bloodiest military campaign in her history.

The American contribution to the Hundred Days Offensive strategy involved an assault into the forbidding territory called the Meuse-Argonne. Then as now, the region was a patchwork of rivers, forests and hills, difficult to navigate even without having to fight your way through dug-in Imperial German veterans.

The goals were two-fold: to break through the defenses and reach the vicinity of the critical city of Sedan and more importantly, cut the rail line supplying the German forces to the west. Secondly, even if those objectives could not be reached in a timely fashion, the pressure of the massive offensive would prevent the Germans from reinforcing their troops facing the British Army.

After years of frightful slaughter and poor leadership, the British forces in autumn 1918 comprised the most powerful army in the world: a lethal, competent and mechanized force for which the exhausted Germans had no answers.

Into the midst of this gigantic conflict strutted a short, cocky and literally stuttering Missourian named John Lewis Barkley. Barkley would not only survive the grinding battle, he would earn the Medal of Honor for what was probably the most devastating ambush ever laid on by a single American soldier. In 1930, Barkley turned his experiences into what is now entitled "Scarlet Fields."

Not much of a student, Barkley had a love for stalking though the wilderness of southern Missouri with his rifle, becoming a crack shot. The men of his family tree had a Lieutenant Dan Taylor-ish history of enlisting and fighting in America's conflicts, so he leapt to the colors after the declaration of war in 1917. However, Barkley's stutter was a disqualifier, and he was sent home. His father, in what had to be a really bad moment for John, sighed and said:

"I guess the Barkleys have finally petered out."

In a display of the stubbornness which propelled him through the War, Barkley enlisted again. This time, he faced a panel of three doctors. Physically, he was fine--except for the stutter. The three debated the issue until one of them burst out: "Dammit, we're not enlisting orators here!" And with that, Barkley was in. His stutter posed him little trouble with the fast-growing and woefully-unprepared American Expeditionary Force, but his dislike of spit and polish discipline did. Barkley would court insubordination and AWOL charges for the rest of his basic training, such as it was.

Fortunately for him, he kept running into officers who saw his soldierly qualities through the reflexive insolence and found ways to make him feel guilty rather than come down hard with military discipline.

Barkley was even more fortunate to run into a pair of the most interesting supporting characters I've stumbled across in military memoirs: Jesse James and William Floyd. James and Floyd were long-serving regulars and full-blooded American Indians. Both--especially the man-mountain James (the memoir has pictures of the men)--towered over the slight Barkley, but took a shine to him. Both were superb soldiers and helped him on some of his AWOL adventures, both in America and overseas. The same penchant for hi-jinks may be why the two men treated him like a little brother.

Barkley is a white southern Missourian of his era, and his views of Vietnamese truck drivers and black graves registration troops are uncharitable, if not viciously racist.

But Barkley has a much more sensitive and insightful view of his Indian fellow soldiers. Namely, that they bore the difficult burden of a *positive* stereotype. Sure, Indians were often the subject of ugly portrayals as ignorant savages, addicted to drink, speaking a pidgin English, etc.

But there's not a remote hint of that in Barkley's writing: James and Floyd scrounge up and drink booze for the same reasons Barkley did. And when Barkley says that James could have found booze in Andrew Volstead's house, he speaks from the purest admiration for the scrounging skills involved.

No, the stereotype Barkley noticed was of the Indian soldiers having to live up to the reputation of being great warriors. Even the most hate-filled of whites generally saw Indians as a warrior culture of fearless stoic figures who could either slay you hand-to-hand or vanish before their enemies' eyes and kill them via ambush. Both James and Floyd bore that burden successfully, being decorated for heroism themselves. But sometimes the stoic facade cracked, as when Barkley recounts the two men's silent horrified reaction to witnessing train car after train car of wounded French soldiers streaming back from the front lines.

I will not spoil the rest, as Barkley's memoir is worth reading for a rare first-hand glimpse into America's first forgotten war. The style is detailed enough without reading like a novel. Barkley's humor and, yes, love of soldiering peek through, alongside a spare sense of horror that was inevitable in the Western Front's trenches. But it is *not* an All-Quiet-On-The-Western-Front look at war. Barkley does not downplay war's awfulness, but he finishes the book as a patriot who was proud to be part of a melting pot of green Americans who served when their nation called.

And his ambush of a German regiment that led to his Medal of Honor would be too ridiculous for fiction. But the grateful American witnesses to it were numerous, and his account has a matter-of-factness that confirms it.