Excitement on the Lakes!

Email ThisBlogThis!Share to TwitterShare to FacebookShare to Pinterest
Labels: Michigan

Space aliens are more likely to wonder why Neil deGrasse Tyson assumes they would think like him.

Dude needs far more time in the lab and far less on Twitter.

The fun parts (following Spanish language accounts to help my reading comprehension) were outweighed by the insanity. Some well-grounded folks can handle it.

Anyway, the sad part of Tyson's tweetstorm (there are more in the same dull vein) is how it illustrates how wonder and imagination are dying among so many.

And when those go, empathy is not too far behind.

The failure of "conservative Catholicism."

I am not the biggest fan of Damian Thompson as a commentator, but his basic observation about the state of conservative Catholicism is fundamentally correct.

Conservative Catholics are in a ghastly situation. Confronted by a malicious pope and pro-abortion Biden loyalists, they’re being offered Integralist sectarian fantasies or Vigano Mark of the Beast paranoia. I despair.

I am bracketing "integralism" for another day because Thompson is not a reliable political guide to anything other than British Toryism. But I am in complete agreement with him on Vigano, who has allowed a ghostwriting dipstick to turn his name into a byword for crankery.

But my sympathy largely ends there. The fact is, "the ghastly situation" is almost entirely one of conservative Catholicism's making.

The conservative wing has a minimal sense of the wider history of the Faith, replete as it is with failed councils, corrupt leadership and theological windbags in love with the sounds of their voices. Like the leftists they claim to oppose, their historical sense of the Church begins with Vatican II. Indeed, it is not a stretch to say that conservative Catholicism was birthed by the failed 21st ecumenical council and cannot live without reference to it.

In response to the chaos of "renewal" after 1965, the "conservatives" chained themselves to the papacy and the often-dubious "hero bishops" (coughBruskewitzcough) appointed by them. But by conceding the essential goodness of the reforms, they simply made themselves unpaid interns for whichever direction said reforms were taken by the holder of the papal office.

The documents just don't say what the leftists say they do. Read them, and understand that all is well. It's just not being implemented properly. The papal office we stand beside agrees with us. Reform is needed, just not the kind of false reforms the loonies are trying. We will triumph--it is inevitable.

And so the problem for conservatives began: their entire project rested on the invocation of authority, and nothing else. The unexamined circular assumption conservativism operated under was this:

So, when the inevitable occurred (contrary to their predictions of inevitable triumph) and a pope was elected who was unfriendly to the conservative Catholic project (such as it was), the game was up.

Oh, sure: they tried to persist with copes about how the current pontiff was really on board with them. How could they not? Authority had agreed with them for decades! Reading Francis through Benedict and all that. But, over time, that stopped working for most of them. Of course, there are still glassy-eyed papal maximalists out there who flack for every syllable coming from Casa Santa Marta in a way that would make average Latter Day Saints flinch, but the less said about digital cargo cults, the better.

"Reform was needed," the chant went. But neither conservatives nor leftists ever questioned whether a damaged and smug church in need of reform was capable of generating fruitful, genuine reforms--as opposed to "valid-but-wrongheaded-if-not-technically-damnable" ones. See, e.g., Lateran V.

Indeed, the unreflectively self-assured and repetitive-beyond-parody declarations of the sole path to righteousness still issued from on high suggest that inflexible triumphalism is alive and well. How could it be otherwise? He was formed by the same damaged and smug church--indeed, by the order most central to it and the imagined reforms.

So, in the midst of chaos and wreckage, conservatives still have their old misbegotten authority reflex, but no one to imprint on. Sure, some have gone to substitute pope figures like the tragicomic Vigano, or a supposedly-heroic truth-telling bishop or priest who comes to notice of the the internet.

Thus inevitably repeating the cycle of disappointment and ultimate failure.

There is no way to save conservative Catholicism. But conservatives can extricate themselves from the failed paradigm. Recognize it is broken beyond repair and move on.

But not to a new paradigm or a new leader. Rather, to prayer, scripture, the saints and the corporal and spiritual works of mercy. Those never change, no matter who is in charge.

In time, God will find your cause for you.

Email ThisBlogThis!Share to TwitterShare to FacebookShare to Pinterest
Labels: A Catholic House Divided

I hoped these would have appreciated in value.

Eh...not by much. But I am still glad to own them. 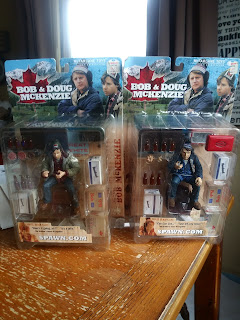 Rome has chosen the short spoon for this meal.

Do not be angry at those among China's faithful who apostasize.

Be angry at the collared hirelings who could not possibly care less about what was happening to them.

The bloodlust in revolutionary civil wars stems from the apocalyptic nature of such contests, the attempt on each side to create a new society and cultural order, not merely a different political system, totally purged of antagonistic elements.

In these conflicts, the enemy is perceived not as an ordinary political rival, but as a kind of metaphysical incarnation of evil that must be eradicated before it infects, or imposes the same terror on, one's own side.

A revolutionary civil war is not an ordinary political contest, but a conflict of ultimates about society, religion, and culture, perceived to demand a total and uncompromising solution.

Email ThisBlogThis!Share to TwitterShare to FacebookShare to Pinterest
Labels: Quote of the Day, Spirit of '36

Full of sound and fury.

So this happened last week.

I will wait until autumn, after all the parts are put through the grinder and squeezed into the casings. And likely there will be a wall of text that ends with "your bishop will do as he likes."

I will spite Shakespeare above and note that there is one very significant takeaway here:

I have been paging through this slim-but-interesting volume about Catholic disaffiliation in the English-speaking world. Based on survey responses, it analyzes what might bring back those who no longer practice.

My impression thus far is a sad one: something identified as bringing back one group is also demonstrated to antagonize another, and vice versa. Or will antagonize those who are still there.

At some level, I can empathize with a shepherd who sits inert for fear of tilting the boat so as to dump people overboard. "Let's keep as many as possible close to the sacraments," he reasons.

Then again, the reality is that people are continuing to go overboard and the trend is accelerating, thanks to the pandemic.

Here we are, and here we go.

Email ThisBlogThis!Share to TwitterShare to FacebookShare to Pinterest
Labels: A Catholic House Divided

A little on the lean side of posting of late, but what can you do?

My late Uncle, God rest his soul, demonstrated why everybody needs a simple will. I'm not going into details, but yeesh.

Intestate succession laws help, but you'll be happier if you draft up something and register it. Vaguely discussing the matter with loved ones over the years, not putting that into writing and not letting the beneficiary about a significant (if understandable) designation on retirement funds until they stumble across the paperwork a few weeks postmortem is *not* recommended.

Anyway, things seem to be calming down, and if I don't have to drop any more money into a 12 year old car for a few months, that would be great.

Email ThisBlogThis!Share to TwitterShare to FacebookShare to Pinterest
Labels: Personal Trivia Readers Have To Force Themselves To Give A Rip About

My only problem with the Sacred Heart devotion is aesthetic. In this, the month of the Sacred Heart of Jesus, I have to confess that I find almost all of the popular imagery saccharine at best and off-puttingly androgynous at worst.

However, if we could duplicate the statute of the Sacred Heart in the Basque city of Bilbao, we'd be on the right track. Completed in 1927 after a subscription campaign by the Jesuits, it is still a major attraction today.

I mean, just making small copies of the depiction of Jesus would put us on the right track. 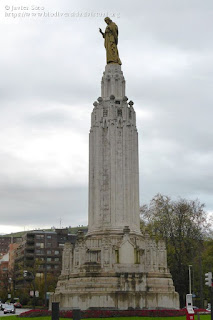 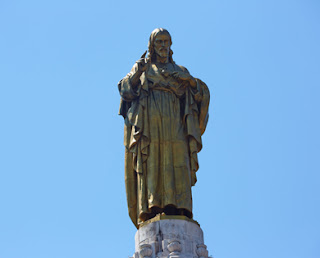 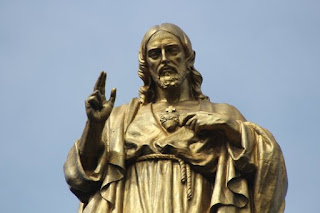