So dark the con of Jaeiextostpsacgreamqwfkadpmqz.
at April 27, 2006 No comments:

Email ThisBlogThis!Share to TwitterShare to FacebookShare to Pinterest
Telebrands Presents: How to Speak Truth to Power--At Absolutely No Risk to You!

In his neck of the woods, Carl Olson finds some cheeky Rebels striking a blow against the Theocrat Empire.

I hereby offer my finest golf clap for the transgressive courage of the sophomores at The Insurgent [sic].

Because, as we all know, it takes cast iron cojones to challenge Christian beliefs in America. Remember the fate of Matt Stone and Trey Parker for their depiction of Jesus in the Muhammad cartoon episodes. I mean, you are risking almost certain applause.

Somewhere in the dark recesses of the Vatican, Benedict XVI is formulating a fatwa against the Oregon onanists even as we speak ('ware the albino). And once he activates The Pope Signal, the mind-gelded laity will be dispatched to do their best to liquidate the blasphemers. In anticipation, I'm readying my explosive belt for my trip to Duckland (at the moment, I am waiting for the first coat of rat poison on the nails to dry--don't you just hate that?).

I'm also glad to see that the bold essays are larded with F-bombs. An Authentic Undergrad Leftist Jeremiad™ composed by a scraggly-bearded guy who reeks of patchouli and won't declare his major until his fifth year demands no less.

I mentioned her back in March. Prayers continue to be welcome.

She goes in for exploratory surgery tomorrow morning. Her physicians are relatively certain of the problem, and are further confident that it has not spread. She will need chemo, and, as a result, will be cue bald in a short period of time.

She is soliciting possible slogans/logos for her hair-free noggin.

I'm not just the president--I'm also a client.

We will be visiting her on Saturday, so I'd like to present her with a list, if possible.

[Updating the Update: the surgery has been rescheduled for next Tuesday. And keep her mother in your prayers, too.]
at April 26, 2006 No comments:

I never wanted the damn cat in the first place.

"You just have to watch her for a couple of weeks, until my friend gets settled in." Heather remembers the conversation differently.

Our memories do agree as to the reaction of Molly (my cat, and still with us): she spent the first two days of Bailey's "visit" under my bed, hissing at the world.

That was March 1998. Bailey was a Himalayan. Purebred. But she wasn't a "show" quality cat because her eyes were blue, not yellow (has to match the fur color, or some such nonsense). She'd gone through at least one previous owner before Heather's friend, and probably two. Hence the guess as to her age. Her repeated stints in pounds showed in her early personality, and Heather noted she seemed to have a foster child's standoffishness. That was about right--until after I brought Bailey back from the vet's in the fall of 1999 after her bout with a urinary tract infection. She spent a half hour in the foyer of the apartment, warily looking around. She literally refused to move. Then it sank in that she wasn't being given away again and she became positively gregarious. When we moved to Casa del Price in 2001, she had no adjustment problem whatsoever. We barely had the couch against the wall before Bailey fell asleep on it, secure in her place.

A veritable dander factory was our Bailey. After 8 years, I suspect I have angora lungs. But, as it turned out, overloaded vacuum bags were a minor inconvenience.

That, and the hell with cat shows: Bailey turned out to be an ideal pet. She never so much as hissed at the kids, who found her irresistible. Especially The Boy™ and Rachel, who enjoyed carrying her around in a headlock or stranglehold. Good-natured to a fault, her swat fights with Molly were beyond hilarious. I remember one time when Molly walked up, out of the blue, and just cuffed her three times, right between the eyes. Sounded like someone testing a cantaloupe for ripeness.

Bailey blinked for a couple of seconds, shook her head, and the chase was on. For all their tiffs, the cats never hurt each other.

She started going downhill two weeks ago, increasingly disoriented and sluggish. Now she's gone--total kidney shutdown, tumor-related. Had to put her down. But not before we held her in the brilliant late afternoon sunshine out on the lawn, before carrying her into the sterile room where an overdose of anesthesia ended her life.

D3 is no shrinking violet:

1. He's a TV critic, for starters. Upon being informed that we were changing the channel from Noggin to The Weather Channel for the local forecast, he announced to his mom:

"I hate The Weather Channel. It sucks."

Must get it from his Uncle Doug. His father's vocabulary is as pure as the driven snow.

2. He's schedule-oriented. As Heather and I were finishing up dinner, he said he wanted to go outside to play. No problem there, except for the fact that Mom and Dad were still eating and conversing.

D3: [Scowl. Pause. Then, gesturing with his index finger:] "I'll give you one minute."

I had to cover my mouth to keep from laughing out loud. I guess he's heard that a few too many times.
at April 18, 2006 No comments:

Would You Survive The Change?

Thanks to Change-verse fan Mark Huegerich, you can now find out via the attached quiz.

I was "dead in 2 months" myself. Yikes. Mark reports that no one has yet come up with "the Lord Protector" as a result, which is a little comforting.
at April 17, 2006 No comments:

Email ThisBlogThis!Share to TwitterShare to FacebookShare to Pinterest
"Oh, Andrei--you've lost another submarine?"

That marvellous line from The Hunt For Red October, delivered with shark-like relish by the late, great Richard Jordan, pretty much encapsulates my reaction to the "Earth-shaking"™ discovery of the Gospel [sic] of Judas.

Yeesh. Spend a moment with the gnostic gospels--without the scholarly apparatus filters eager to read an "alternate" or "suppressed" pseudo-Christianity into them. The thing that is striking, especially when read against the canonical Gospels is their artificiality--the people of the authentic Gospels (Jesus, Judas, Mary Magdalen, etc.) are reduced to talking heads reciting gnosticism's philosophical bullet points. There's nothing that hints at any kind of narrative--it's a mere collection of often-opaque, even nonsensical, ponderings in search of a famous spokesman. Hence the lifting of figures from Christianity. Say what you will about the practice, it's great salesmanship.

The Gospel of Some Gnostic Guy wouldn't have attracted nearly as much attention.

For the Lord is gracious and receives the last even as the first.
He gives rest to him that comes at the eleventh hour,
as well as to him that toiled from the first.
To this one He gives, and upon another He bestows.
He accepts the works as He greets the endeavor.
The deed He honors and the intention He commends.

Let us all enter into the joy of the Lord!
First and last alike receive your reward;
rich and poor, rejoice together!
Sober and slothful, celebrate the day!

You that have kept the fast, and you that have not,
rejoice today for the Table is richly laden!
Feast royally on it, the calf is a fatted one.
Let no one go away hungry.
Partake, all, of the cup of faith.
Enjoy all the riches of His goodness!

Let no one grieve at his poverty,
for the universal kingdom has been revealed.
Let no one mourn that he has fallen again and again;
for forgiveness has risen from the grave.
Let no one fear death, for the Death of our Savior has set us free.
He has destroyed it by enduring it.

He destroyed Hades when He descended into it.
He put it into an uproar even as it tasted of His flesh.
Isaiah foretold this when he said,
"You, O Hell, have been troubled by encountering Him below."

To Him be Glory and Power forever and ever.

Just a reminder, now that the news cycle has passed this one by.

Sometime soon, you will be faced with the possibility of being embarrassed because of your Christian faith. You may even be able to avoid it by keeping your head down. Go along to get along, and all that.

Then again, maybe you shouldn't.

He didn't. And he was under a lot more pressure. 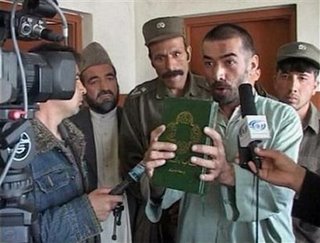 A fine meditation on God's forgiveness.

From Neil at Catholic Sensibility.

This was especially striking:

Often, Trautman said, these new translations are closer to the Latin original, but he argued that they needlessly dislodge "accurate, orthodox formulations of the faith we have prayed for the last 35 years."

Hence the quote from Animal Farm: it is frighteningly, insidiously easy over time to gradually become that which you are fighting against. A 35 year old "tradition," no matter how flawed, has to be defended at all costs simply because it is "tradition." Nevermind that the revolutionaries of the '60s tossed aside a tradition that was a millenia old--or older. Yesterday's revolutionaries have become today's reactionaries.

How long before we start seeing The Trautman Intervention, I wonder?

This part didn't bug me all that much, though, even though the Bishop is playing a bit of a shell game:

Further, the First Eucharistic Prayer refers to a "precious chalice," not a "cup," an instance, Trautman argued, of "imposing an agenda" on what the Bible actually says.

After all, I can count on the fingers of one hand the number of times I've even heard the First Eucharistic Prayer in the past two years.

And then there's this:

Finally, Trautman appealed to the example of a translation of the Book of Rites carried out under authorization from the U.S. bishops in the early 1950s by Holy Cross Fr. Michael Mathis, who wrote that a good translation "adapts to the genius of the language," resulting in an approach that is neither "slavishly exact or loosely free, neither archaic nor foreign, but American."

"Will the wisdom of 1953 inform present-day bishops in their handling of present-day translations?" Trautman asked rhetorically. "We pray, and we plea."

What would be very interesting is to see an excerpt from that Book of Rites, and not just its translation principles. Something tells me it's a lot less colloquial than the translations he's defending.
at April 08, 2006 No comments:

Email ThisBlogThis!Share to TwitterShare to FacebookShare to Pinterest
If Roger Cardinal Mahony tells you that the sun will rise in the east tomorrow morning...

On the lighter side.

Heather picked up de-Coding Mary Magdalene by Amy Welborn last week, and gives it a solid review over here.

And if she--who supervises two antic toddlers, a pre-schooler, a 36 year old teenager, two cats and a massive, escape-minded bird dog--can fit it into her schedule, so can you.
at April 04, 2006 No comments:

Email ThisBlogThis!Share to TwitterShare to FacebookShare to Pinterest
Fist...of...Death...clenching......

The brakes are out on the van.

In the immortal words of Ricky Riccardo: