The Archdiocese revealed its plan yesterday, and it's often more a hint-laden puzzle than something you print up on Mapquest. Bottom line: the inner ring suburbs, not Detroit proper, take the hit this time.

To my pleasant surprise, our inner-ring suburban parish was not clustered, but the qualifier appears to be "for now." The AOD also swatted our vicariate (translating for the non-beadsqueezers: a "vicariate" is a regional organizational unit consisting of a number of parishes) for not providing much in the way of real planning on its part. Essentially, our vicariate tried to punt some tough issues back to the Archdiocese, and downtown said "Nuh-uh--do some serious thought on your own."

There is a significant amount of kvetching about this, as the article shows, but actually I like it. It treats us like grownups and forces us to take some ownership in the process. It's far, far better than the top-down debacle in 1989 that drove Cardinal Szoka into retirement. The downside is that there is plenty of uncertainty remaining, but that's pretty much inevitable in this era.
at March 30, 2006 No comments:

A Reasonable Critique of Distributism.

Found and further annotated by the always-thoughtful Shawn McElhinney.

Actually, the critique is directed more at what the article terms "neo-distributists," but since I am sick to death of the prefix "neo-", I titled the post accordingly.

I'm pretty sympathetic to distributism as a general rule, but the critique captures the fatal flaw of the philosophy--application: it would take a battle-axe in the hands of a functionally-totalitarian state to implement.

Which is diametrically opposed to the goals of the movement, when you come down to it.
at March 29, 2006 No comments:

Email ThisBlogThis!Share to TwitterShare to FacebookShare to Pinterest
Overheard in a Costco.

As I was shopping for the week, I stumbled across a guy about my age also shopping. He had a daughter (10 or so) and a son (5-7). The son looked at me, and in a stage whisper said to his sister "That guy looks just like Dad!"

A resemblance, sure--both of us stocky, brown-haired, equipped with "mouth mullets" a/k/a goatees (thanks, Ms. Shaidle...), wearing glasses and roughly the same height. The main difference was that his hair was thinning on top.

Which cued up the devastating response.

I did the English thing and ignored it, taking a sudden interest in the oversized box of Colon Blow cereal nearest to me.

You don't hear much cheerleading for the Republicans on this blog.

Here's the reason why: the GOP really isn't that big a friend to my family. It's not that I despise the ideals of defense of the family, limited government, lower taxes, and so forth. Far from it. I definitely do not feel undertaxed, and there's something more than vaguely degrading about the process of having to get my own money back every year. But the Republicans have never really delivered all that much, as Carlson's article shows.

And then there's that little problem of trying to square laissez faire economics with those of Leo XIII, which is much more of a conundrum than many faithful Catholics are willing to admit.

We happen to be one of those one-income families much touted in rhetoric and much ignored in reality. We made the decision, after much agonizing, that Heather would stay home after the Adventus Filii in 2003. Boom--bye-bye, 40% of the family income. But not 40% of the family debt load, alas. We don't regret it--not for a moment. But we have months where we scrape by in exactly the same sense the Titanic scraped by the iceberg on that April night in 1912. Am I asking for a coddling by a gummint nanny? No, not at all. All I want to see is families get, oh, say, 15% of the results the K Street Boys get when their wheels squeak.

Sure, the leadership talks a lot about "family values," but when it comes down to crunch time, the business wing crushes the "social conservatives." Period.

There was an anecdote in a recent Christianity Today where one of the evangelicals responsible for forming the global warming initiative discussed the icy reception the initiative received from the leadership of the GOP. A questioner asked if it was just another example of where there is a conflict between the corporate wing and the SoCons, the business interests usually win.

The evangelical leader paused, then said: "It is not the case that where there's a conflict, the business interests 'usually' win.

On this blessed festival, the Papist Purim, a Convert of Welsh Descent Would Simply Like to Remind His Hibernian Brethren of One Essential Fact:

A Happy St. Pat's to all my readers. Even those who whined their way into a Friday dispensation. 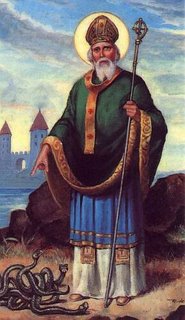 We received news last night that puts a whole new perspective on my list of paltry kvetches below: A dear friend of ours (one of Heather's bridesmaids) has been diagnosed with cancer. Her name is Christina, and she occasionally comments here under a variety of noms de guerre.

She's 33. Doesn't drink, doesn't smoke. Had the symptoms for months, but wrote it off as irritable bowel syndrome. Didn't have health coverage until this month, either. She's had three blood transfusions since going to the hospital on Saturday.

Prayers and good wishes for her and her husband Tony would be most appreciated.
at March 16, 2006 No comments:

Or: What I've Done Over the Past Month.

In no particular order:

1. I was hospitalized [Happy Valentine's Day, honey!], but with treatment, the prognosis looks good. But it was frightening for a while.

2. Related: I've lost twenty pounds. Which is good, but you don't want to try my method. [Sorry, but I don't know most of you well enough to get all global disclosure-ish. Don't take it personally.]

4. I have a new boss whose initial impression of me was that it would take decades to evolve up to the level of Rupprecht The Monkey Boy (1000 points to whoever pegs that reference first). It has improved considerably, but was remarkably unpleasant for a while.

5. I have been invoked as a potential witness in a legal malpractice case. Oh, joy: lawyers.

6. Last Sunday, the Hit Parade grew longer. Yet another problem with the Family Assault Vehicle (after the $630 of cash we don't have to pay for brakes). Three magical little words: Cracked. Head. Gasket.

7. Have you ever had a checking account balance of $0.38 before payday? Now that's entertainment!

On the good side:

My wife is an absolute rock. I don't know what I would do without her. Plus, she has me pegged entertainment-wise: she got me the unrated version of Dodge Ball, and the underrated 13th Warrior. She also tolerated me catching Curling Fever during the Olympics. God's honest truth, it was the only thing I followed closely, and I can't explain why. One further example of her self-sacrificial side: she sat with me throught the director's cut of one of the most historically putrid films I've ever seen: King Arthur. Were MST3K still on, it would be one of the worthiest of targets. Worse than First Kinght, and that's saying something. I can't say enough bad things about it here, so I'll post about it later.

The kids have been a joy, as we have managed to shelter them from the storms. Madeleine is her usual good soldier self, the belle of the preschool, Dale turned three on February 24, and the party was a hoot. A riot of happy cousins, fuelled by sugar and pizza. And our littlest, Rachel--what can I say about her? Two words: Laila Ali. She's pugnacious, the happy warrior of the toddler set.

My immediate family has also risen to the occasion, giving unstinting love and support. Thanks especially to my brother Doug, and my sister-in-law, Maria.

Thanks also to everyone who dropped a note offering prayers, asking how things were going, if they could help, and so forth. You know who you are, but I'll give especial props to the following: Mark Mossa, Zach, Rich, Steve and Mark Shea. Thanks also to the veritable legion of commenters in the last two posts: again, it means more than you know.

And for all who cast votes for me in this--wow. I'll happily take fifth place: it's where Patton placed in the Pentathlon in the 1912 Olympics. Thanks for the votes. And anyone who can tell me where I can get the "Finalist" tags for vanity purposes would have my gratitude.

And finally: Even during the worst of the storms, I have had moments where I have experienced the grace of God, the sure presence of Christ. For that, I hope to be eternally grateful. Thanks be to God for carrying us through all this.
at March 12, 2006 No comments: