One of the many diseases of the modern Church is hero-worship, the seeking after a man on horseback to solve problems.

The cult of personality invariably follows.

This piece is emblematic of that destructive tendency.

I won't be commenting about the endeavor of Michael Voris and Terry Carroll. Though I will say that Michael Voris was very nice to the American Heritage Girls troop my daughters are in when they visited his studio, and he seems to be a decent man. I know one other person who has helped at CM, and he's also very decent. I have mixed feelings about the apostolate as a whole, but that's not what this post is about.

The most notable thing about the soul-bearing essay is that, at the end of the day, the author is simply switching from one cult of personality to another. He's still identifying himself and his spirituality via a hero-figure--from "Vorisite" to "Barronite."

That's not good, he says with English understatement.

If the young man were interested in my recommendations, I'd suggest that he look for a solid parish men's group or Knights of Columbus council, work in the parish food pantry, and stop putting his trust in media princes.

National Values and the Cost-Benefit Analysis. Rancid carnival barker and all-around POS Donald Trump has proposed that we bar entry to the U.S. of all Muslims. This is clearly a garbage policy from a garbage human being, unworthy of consideration.

However, there is one thing that can be said for it: had we been doing it a year ago, Tashfeen Malik, the murderous jihadi sow who abused our hospitality and came to our country to slaughter us, would not have been able to do so. It is--however odious--the only proposal that would have definitively prevented the slaughter, or at least lessened it. If she hadn't been here, she wouldn't have murdered anyone.

Nevertheless, many of us oppose Trump's cynical, atrocious ploy (self included). At a minimum, it stabs in the back those Muslims who have helped us and would pay the price if they were left in their homelands. When you have a moral debt, you pay it. Period.

Beyond that, some have invoked higher ideals, arguing that it would offend our sense of who we are as a nation to implement it--that, despite the risks, we would be killing something that makes us different, betraying who we are. Sure, some will probably turn on us and kill us, as did the sow--but the alternative is worse.

I can respect that.

So stop talking about wanting to "do something" about my firearms.
at December 08, 2015 7 comments:

"Having a clear faith, based on the creed of the church is often labeled today as 'fundamentalism.' Whereas relativism, which is letting oneself be tossed and swept along by every wind of teaching, looks like the only attitude acceptable to today's standards."
at December 07, 2015 3 comments:

Email ThisBlogThis!Share to TwitterShare to FacebookShare to Pinterest
Labels: Quote of the Day

A Nation of Ghouls.

Our unraveling as a nation draws ever nearer. When we can no longer look at the deaths of others without seeing whether those deaths can be bent to serve some political narrative, time has pretty well run out.

In the meantime, while corpses are being brandished and prayers mocked, try to remember those slaughtered in the San Bernardino terrorist attack:

May God rest their souls and comfort those from whose lives they were torn in an act of fanatical hatred.
at December 04, 2015 No comments:

Email ThisBlogThis!Share to TwitterShare to FacebookShare to Pinterest
Labels: "Social" Media, 1860 Redux, In The News

If you can help out, please do.

The family of Lexys Lamp is struggling with her loss and the medical bills for treating her cancer.


Lexys' mother and her teacher say they never heard her complain about her disease, the nearly 50 radiation treatments she endured or the endless stream of doctor's appointments.

"She was always bubbly and courageous," Kerby said.

DIPG is exceedingly rare. Lamp said she knows of only four other cases in Michigan.

Lexys died at home in her mother's arms. She was initially pronounced dead shortly after 2 p.m.

"We were standing there and had hospice and the pastor. I started hysterically crying. I said at that point that I couldn’t live without her," Lamp said.

Suddenly, Lexys started breathing again. The color came back to her face. She had a heartbeat.

The bounce-back was only temporary; she died at 3:30 p.m. But to her mother, it was a comforting sign.

"Lexi always had a way of having the last word at everything, always," Lamp said. "I think that was her way of saying, 'I'm free mommy; I'm OK.'

Email ThisBlogThis!Share to TwitterShare to FacebookShare to Pinterest
Labels: Good People, In The News

Happened to me four times over the course of a week a few years ago.

Thank God I wasn't behind the wheel any of those times.

Email ThisBlogThis!Share to TwitterShare to FacebookShare to Pinterest
Labels: In The News, Medicine, Michigan

There's something purported to be a rebuttal of the 1P5 piece out there.

I'd never heard of the blog in question before, and I'm not going to give it oxygen by linking to it. However, it's a pastiche of frenzied material taken out of context (oh, the irony!) using "WAR IS DECLARED" sized font which predictably flounces off in a snit at the end. Oh, and he first shrills at the far more estimable (not to mention reasonable) Carl Olson's more measured criticism.

Here's the summary of the...effort:


No, really--that's the intellectual integrity of it in a nutshell. Unable to rebut facts, he tries to punch up. For me, the only part that merits a response is where the fraud in question accuses me of suggesting that the pope should be subjected to violence.

My response? I'll let Tommy Lee Jones answer for me.

Fair warning: the OnePeterFive piece regarding the current pontificate contains sweeping and judgmental quotes, observations and one-sided anecdotes--and some of my commentary is likewise.

All the pictures save the first are from yours truly.

The interpretive key to the piece is the word "convert."

Email ThisBlogThis!Share to TwitterShare to FacebookShare to Pinterest
Labels: Against the Mottramists, OPB

The Glories of Detroit. 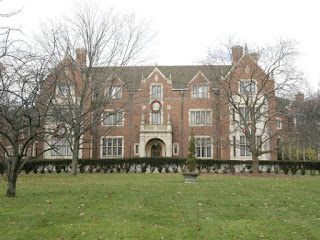 The "Bishop's Mansion" of Detroit. (Photograph owned by the Detroit News).

For those who, more or less forgivably, associate Detroit with "ruin pR0n," the discovery of a gem like the former diocesan mansion in Palmer Woods is a salutary tonic.

If you're in the area, you can tour it this weekend:

Built in the mid-1920s, this 35,000-square-foot Tudor Revival was built by the Fisher brothers [early automotive pioneers and Detroit benefactors--Editor] for the Archdiocese of Detroit to serve as the home of the presiding bishop. Now owned by Great Faith Ministries International, it’ll serve as party headquarters at the end of Saturday’s tour, where ticketholders will be able to see the first floor.

“I think it’s the most significant residence in the city of Detroit, so it befits our whole centennial celebration,” said Craig Vanderburg, president of the Palmer Woods Neighborhood Association, who said the Bishop’s mansion was last on the home tour eight years ago. “I don’t know of any other residence that is of that size. When it was built, it just had all the architecture detail and the grandeur that goes along with the house.”

The Bishop’s Mansion, or Bishop’s residence as it is also known, is one of five homes on this year’s Holiday Home Tour and Soiree, which runs from 6-9 p.m. The home of Palmer Woods developer Charles Burton Woods also will be on the tour. Tickets are $85 (see box for details).

“The (Burton) house was the first house built in Palmer Woods in 1915,” Vanderburg said. “That house has never been on tour ... It’s very appropriate that we have this house (on the tour) in our centennial year.”

Palmer Woods, north of 7 Mile and west of Woodward, is Michigan’s first platted subdivision. Situated on land once owned by U.S. Sen. Thomas Palmer, his estate sold the land that would become Palmer Woods to developer Charles Burton in 1915 to create a first-class subdivision.

The 188-acre subdivision is known for its winding streets, canopy trees and regal homes that reflect a variety of architectural styles, with Tudor Revival as it the most prevalent style. Some of the biggest names in architecture — Frank Lloyd Wright, Minoru Yamasaki and Albert Kahn — built homes there for some of the biggest names in Detroit industry. Two of the seven Fisher brothers called Palmer Woods home.

Not for the Staring Contest part, but for the way Batman's captors kneel before Kal-El as he comes down the hallway. Remember Jor-El's line to his wife as they prepared to launch their only child to the stars?

Apparently, Zach Snyder didn't mean that as a throwaway.

I liked Man of Steel, even if it needed some editing down--after a while, it was just way too much mayhem.

Email ThisBlogThis!Share to TwitterShare to FacebookShare to Pinterest
Labels: Talkies

Ours was wonderful--Heather cooked another perfect 19lb. bird, I finished turning the leftovers into soup base on Monday evening, and we've gotten some of our Christmas shopping done.

So, that explains most of the radio silence.

The remainder is that I've been working on a couple of pieces for Steve Skojec's OnePeterFive which are going into rotation there shortly. I'll actually be the second Price spouse to write for the endeavor, as my Much Better Half posted a nice essay earlier this year.