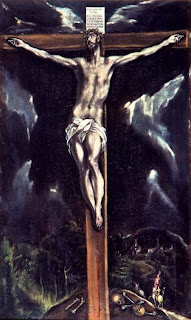 The Archiving of Benedict.

Or, a defense of Pope Benedict XVI.

Be warned--I'm having a bad Lent. This post will display some of that.

I have passed my breaking point with the derogatory comparisons of Pope Francis with Pope Benedict. Even those that aren't intended as derogatory can be, by omission. "Pope Francis is so humble! He cares so much for the poor! He's celebrating Mass at a youth prison!" etc.

Fine. You know what? So did Benedict. All of them. How quickly we forget--or never bothered to notice in the first place. I understand the joy of a new pontiff, and trying to get to know someone who wasn't on any of our radars a month ago. I get that. But--if we don't modulate our reactions, we are, however unknowingly, feeding into a nasty narrative that seeks to pit the new Pope against the Emeritus.

And for some Catholics, the nasty motivation is clear. Behold this stink-bomblet, snarking at ermine and ring-kissing. Something tells me she snaps to in the courtroom (hint--she'd better). But the Pope can't throw her in jail, so she discerns that Christ wanted no earthly signs of respect apart from "How ya doin', Yer Popeship?"

"Anonymous commenters with garbled memories of catechism and glitter aren't representative," you might say. Fine.

How about ordained clerics? Consider this example from one of Roger "RICO" Mahony's (the disgraced Cardinal's own tweets merit no further discussion) ordinands, Deacon Eric Stoltz (no, not the guy from Pulp Fiction). 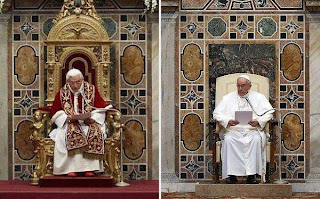 It was posted as a compare and contrast rebuke, obviously. More humility, less attention toward the cleric. Jay Anderson took a righteous swing at this bit of posturing on Facebook, and smacked it soundly.

While we're at it, Reverend: before leading the Humility Brigades into spiritual battle, you might want to tone down the number of references to yourself on the Saint Brendan's website . On the first page, there's a note that the website was designed by...Eric Stoltz! With a link to www.ericstoltz.com!

But wait--there's more! On the "Presider/Preacher [sic] Schedule page, there's a link to "Deacon Eric's Homilies"! Where you can e-mail Deacon Eric! And there's an "About The Deacon" Page (sorry, under construction)!

Do not despair, however: you can hop on over to the Photo Albums page and...eureka! A photo album dedicated to Deacon Eric's ordination nearly nine years ago--and it's the one with the largest number of files! Ah, that I must decrease and Him increase....

Irony: it's a mean bastard sometimes.

Moving on to less tempting targets...

Unfortunately, I have to call a foul on First Things for this line:

What seems to be on the heart of Pope Francis—the Vicar of Christ and the pastor of the universal Church on earth—is a desire to move out from under a stifling, dull, and technical rubricism toward the Paschal light of Christ’s redemptive charitable love.

No. No. No. Ten thousand times, no. This is slander. Period. It may be inadvertent, but it is slander nonetheless. It indicates that the writer had no idea of what Benedict was saying or doing with the office of Pope and with the liturgy during his pontificate.

Look, Pope John Paul II was a unique, outsized figure in the history of the Papacy. He had a stage actor's ability to magnify his reach and effect. The odds of his successor replicating that charismatic effect were zero. So Benedict didn't try. Instead, he let the office speak more loudly through historical and liturgical symbolism than he ever could as a stage presence. If the previous papacy was Pope John Paul II, his successor was Pope Benedict XVI. As Amy Welborn brilliantly pointed out, it wasn't because Benedict was a vain monarchical clotheshorse, it was because he was a teacher in an office that was bigger than he was, and he was pointing to a profound historical reality embodied in the Papacy. Likewise, in the liturgy, rubrics were emphasized because it wasn't about the priest--even if he happened to be a Pope--but because the rubrics point to a greater, supernatural reality which is dependent upon God.

So, please, stop pitting RIGHT NOW against LAST MONTH, and engaging in what strongly hints at a washing of one's hands of the previous pontificate. The Body of Christ deserves better.

But beyond that, my thoughts are still in mid-mull. Some random thoughts, though:

I understand the panic fire from places like Rorate Caeli, but can't condone it. As I mentioned years ago, I wander the borderlands between "conservative" Catholicism and the "traditionalist" variant, or as I like to think of it: "The Great Feud Between The Clans."

My children attend the burgeoning Assumption Grotto homeschooling co-op every week, and my middle daughter received first communion there. They are learning Latin, and Rachel can recite the Glory Be and the Hail Mary flawlessly in the mother tongue of the Church. They like learning from Fathers Perrone and Bustamante, and we haven't managed to offend the hell out of everyone, which is a sign of Providence.

I'm not "there" in traditionalist Catholicism, and may never get there. I understand the centrality of traditionalist concerns regarding liturgy, catechesis, architecture, sacramentalism and the like. I even share it for the most part. But the ready FIRE! aim... mindset wears. Heavily, in fact. It's usually the product of bitter experience at the hands of the loonies unchained by the Second Vatican Council--I get that, and have experienced it myself. But not everyone wearing the tartan the wrong way is some Bolshevik looking to get his Constantine V on. [The capital A Asshole at Assumption Grotto who gave my mother grief for soft talking before Mass when I wasn't present, please take note.] Thus, while I think it is legitimate to wonder about why Buenos Aires couldn't support a TLM under SP if then Abp. Bergoglio was really in favor of it, such does not authorize the shrieky, hysterical meltdown at Rorate Caeli. The man appears on the balcony and people are sounding the alarm klaxons--or worse. That's not productive. In fact, it's more reminiscent of something I'd expect to see from the progressives.

Likewise, conservative Catholics need to quell the tendency towards a Papal-centric reading of all things Catholic. Which is not to be read as some silly National Catholic Reporter-ish I'm-so-wonderfully-well-educated-why-won't-the-Pope-admit-my-middle-class-or-better-progressive-white-American-concerns-are-correct-and-universal? crappola.

But...no Pope is Tradition. He is always and ever its custodian, expounder and occasional definer. But he's not an oracle. If he downplays or seemingly ignores a legitimate part of the collective patrimony, that is worth mentioning, and--yes--charitably questioning.

Thus, let's not forget all that Benedict did, symbolically as well as in writing, simply because we're gaga for the new guy. We can't be a Church of novelty, and the Papacy is bigger than its current occupant. It has to be.

More thoughts later as the mulling continues.
at March 18, 2013 3 comments: