A good and brave deed.

Pray for Mike and Janet Inman, who are battling to remain legal guardians for a neglected seven year old girl. May God grant that you are successful in this endeavor.
at December 26, 2007 No comments:

Email ThisBlogThis!Share to TwitterShare to FacebookShare to Pinterest
Labels: Bureaucracies and Other Manifestations of Hell, OPB, Powers and Principalities

A Christmas to remember.

As requested, pictures of The Lert: 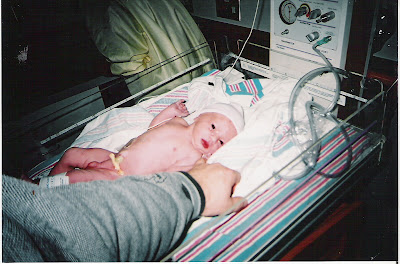 Louis in the baby warmer, about five minutes after being born. He has a strong grip on my pinky finger in this one. 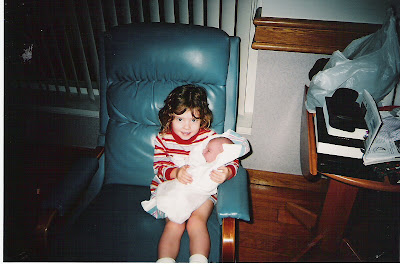 Rachel holding Louis on the evening of December 19. My baby girl grew a lot that Wednesday.

All the Prices are doing well, including the newest addition. We had a full and delightful Christmas, which was started by Madeleine's singing with the children's choir at the Vigil Mass. Paper ripping on Christmas morning followed, itself followed by the baptism of our baby boy after the 10am Mass. [Pictures of those events will be posted upon development. Those of you who want faster pictures are hereby invited to buy us a digital camera.]

There was much happy gifting for all involved, and Heather managed another turkey triumph (this one a record 16.75 pounds). The only down note is a cold blowing through the home, with me as the most interesting-sounding victim (think Dennis Quaid's Doc Holliday in the underrated Wyatt Earp). But if that's the bad part, there's no doubt we've had a Christmas for the ages. May you and yours have a blessed Christmas season.
at December 26, 2007 No comments:

America must need lerts, because The Boy 2.0™ is quite alert. He's also a shameless charmer. Photos to follow.
at December 19, 2007 No comments:

Thanks for all that you do, Mom.

May you have a happy and restful day--you deserve it!
at December 16, 2007 No comments:

Heather has a baptism question.

Any insight you could provide (especially my priest reader/readers(?)) would be greatly appreciated. I'm not worried about the validity angle, myself.
at December 16, 2007 No comments:

Email ThisBlogThis!Share to TwitterShare to FacebookShare to Pinterest
Labels: Catholica

I received word from the Much Better Half yesterday afternoon, as I stood in line at the overcrowded supermarket, getting the groceries for the next two weeks. That was exciting. I hustled home, we threw the perishables in the fridge/freezer, and sprinted to the hospital.

So we trekked back to the Siekierskis, who had again, with banzai charge courage, taken in and fed our three on a moment's notice. Many, many thanks once again.

Then we headed home, beating the winter storm ("near blizzard conditions") which has, to the moment, dumped about 8" and looks to plop another 3 or so before all's said and done.

So, of course, Louis is going to insist on being born today. Which wouldn't be a bad thing at all.

Thanks for all the good wishes and prayers. Appearances here will be sporadic, as you can well understand.
at December 16, 2007 No comments:

Our friends' son, Daxx, is a finalist in a video contest sponsored by Del Monte Fruit Chillers. Really--go here. He's in Deny, Deny, Deny. I am sad to report that, despite his impassioned testimony, he's lying through his teeth.

But he--and they--still deserve a trip to Disney World, so make sure to vote early and often, starting today.

Email ThisBlogThis!Share to TwitterShare to FacebookShare to Pinterest
Labels: OPB

This morning, we thought this latest set of contractions was the real thing. We even thought there was a little placental fluid leakage. So we dropped our kids off at the home of the fearless and unbelievably generous Heather Siekierski, who has five herself, the eldest being five...

...and we sped to the hospital. Well, the labor was legit--sorta. "Early labor," but Heather's only dilated to 1.5, 50% effaced, and The Boy 2.0 has only dropped to -3, which means he's still firmly in place. An hour of walking a circuit around the hospital brought more contractions, but no budging of those figures. So we went home.

Truth in advertising: Got time for nothin', but that'll do.

So, Linda Richman-esque, discuss amongst yourselves.

Christmas shopping; the prospects of Detroit getting a professional football franchise; Who's Goofier: The Tablet vs. National Catholic Reporter; greatest Byzantine emperor; bowl matchups (Michigan's going to get flat-out murdered by the Gators, for the record); best modern country music singer; decisive battles in Western history, favorite conspiracy theories involving the Vatican--really, knock yourself out. 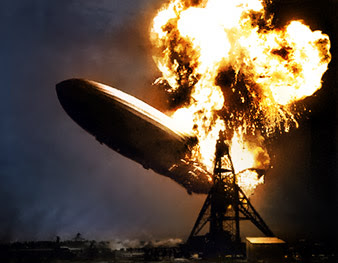 Greg Schiano of Rutgers just turned Michigan down.
Les Miles doesn't sound like a guy who's turned the page quite yet. But it's become abundantly clear the AD's office is leaving the love unrequited.
Why the sports stuff? One, I enjoy watching it. Two, I enjoy talking about it. You know what? Sports is the last civil conversation in a polarized America. It's the last debating ground where facts are used and even when the emotions run high, the opponents laugh and shake hands at the end. It's not a place where "you're insensitive and have hurt my feelings" is deployed in a dispute. And it's the last meeting place where you will get people who are otherwise diametrically opposed on every other important issue to stand on the same side and cheer.
It's a refuge from the rhetorical muggings happening every place else in the public square. How could I not like it?
Oh, and Doug--the Cowboys are way overrated this year.
at December 07, 2007 No comments:

"Sleigh Bells" is supposed to be "Sleigh Ride." Specifically, the Johnny Mathis cover that drives Heather to the clocktower with a .50 Barrett.

Once there's a vote, I can't edit anything. Wouldn't want to poison the integrity of the internet polling process, or something.
at December 07, 2007 No comments:

Email ThisBlogThis!Share to TwitterShare to FacebookShare to Pinterest
Labels: BlogPolls

Haven't really had a chance to catch my breath of late. We are under a Baby Warning from the National Natalist Service, which means a baby is imminent and we must complete our plans before he arrives in the area. Then, of course, we take cover.

Haven't slept for ____ in months, actually, but now's a particularly bad time to be tired. The bright side: Maxwell House's 100% Arabica Beans upgrade is a very pleasant surprise. Good, smooth stuff.

I don't know for a fact that the Michigan athletic department has botched the coaching search, but a fellow Michigan fan suggested that this seems like the perfect metaphor:

Steve Skojec sent me a James Carroll article on the Spanish Civil War which is worth filleting, but no time at the present. Speaking of Carroll, I have a new warning system for posts involving his oeuvre: 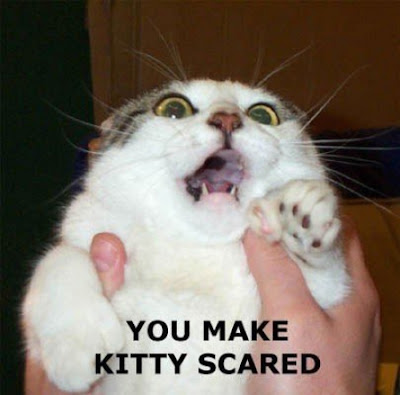 Finally, prayers for my sister-in-law (Heather's sister), who is going through a very rough patch at the moment.
at December 06, 2007 No comments:

Heather and I went in last night because she was experiencing regular (10 minutes apart) contractions. The professionals let her go after 2 am. The contractions (and they were that) subsided, and they don't induce at 36 weeks. They also don't stop labor, either, but there you go. "She could go today, or it could be two weeks."

Big, huge, unrepayable thanks to our magnificent neighbors Shelly and her son Kazz, who came over at the drop of a hat late Sunday evening to watch the sleeping kids until we got back.

This capped a weekend where we finished getting the room re-arranged for the Imminent One's arrival, bought a nice used dresser for $30 (I know where you can get cheap furniture in metro Detroit, BTW), and put up the Christmas tree and strung lights in part of the back yard.

Dad gave me two storage boxes full of lights, some of which are older than I am, I'm certain (fabric electrical cords). It also gave me the golden classical education opportunity to explain the story and meaning of Alexander the Great and the Gordian knot. There's a reason I laugh out loud every single time at the decorating scene in National Lampoon's Christmas Vacation: I've lived it.

Oh, and our house sounds like a ward for phosgene gas victims. Maddie is getting over strep throat, Dale has croup and we're waiting for the other shoe to drop on Rachel. Early betting favorite: hanta virus.

Dale received a steroid shot yesterday, which has eased the stridor cough considerably, and is frittering away our remaining sympathy with Binkley-esque complaints.

Me: "Oh, I don't know, could be more serious. Maybe Etola or toberculosis."

Oh, and the sports news was uniformly depressing as regards the pigskin. Looks like Michigan got pantsed on the Les Miles situation. I still think he might come here in a few years, but Lloyd Carr loathes him and the AD insists on treating this process like it's a debutante ball and not a knife fight.

Memo to Bill Martin: stop bringing a quill to a gun battle.

Oh, and the Lions? Come on, now--you don't stink up the joint for a half century without establishing some inexorable, coach-proofed trends: namely, the knack for getting yourself into spectacular death spirals.
at December 03, 2007 No comments: