The future of cancellation culture.

In saner times, a friend of mine once said during the sexual abuse scandals that the Catholic Church would one day be vilified for policies against child abuse. Not sure if he believes the same now--changing times and circumstances have altered his perspectives on a good many things. At a minimum, I doubt he would repeat that prediction in public.
Regardless, he was on to something, given the rapid disintegration in the consensus on sexual mores which followed the no-fault divorce revolution which began in the 1960s.
But happily for some, there will always be people who are cancel-proof. For example, if the former teenager is a valuable member of a progressive vote farm or holds an office too valuable to concede to the opposition, then there is literally nothing that person could have said or done in the past that would damage their standing. Look at Governor Blackface-Or-Klan-Hood in Virginia, Joy Reid, and Justin Trudeau, to name but three.
Hail the Daily Party Line and all will be well for you.
For everyone else, the gulag beckons.
I'd say we're about ten years out from soft-focus sympathetic "mainstream" media portraits of child sexual abusers. But then again, I'm always an incorrigible optimist. 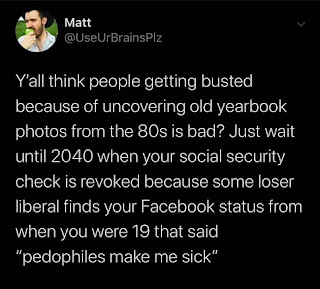