The danger is that you might have a disabled child.

John Allen strains mightily to argue that Zikaquiddick is the same as the (rumored and unproven) birth control for rape permission and Pope Benedict's condom for AIDS comment.

Here's what he says:

In both cases, the moral analysis shifts because birth control is being used not to block the transmission of life, but to prevent the infliction of a harm — either unwanted pregnancy as the result of violence, or infection by a deadly disease.

Except, of course, that the Zika permission involves neither, and Lombardi's confirmation states no such conditions.

Here, the envisioned danger is that one may conceive a microencephalic child. The use of condoms and other contraceptives in this scenario is entirely intended to prevent conception.

Zika is not--not even remotely--a "deadly disease." Not one death has been attributed to it since its discovery in 1954. It sounds unpleasant, and I would not care to contract it: there's a rash, fever and body pains. But it is not *deadly*.

The fear is that there might be a link to microencephaly in in utero infants. That's it.

So what contraception does here is what it is intended to do: avoid the conception and birth of such infants, hypothetical as the linkage may be. It is the intended effect of the Pope's permission.

This isn't some development of doctrine--it is the flat contradiction of it. And from it, much follows. You have a genetic history of X? Here are your Trojans. Contra Buck v. Bell, one generation of your condition is enough, thank you very much.

From now on, it's OK if the Pope does it?

Probably should start boning up then, eh?

Exciting stuff with all sorts of applications.

Oh, and the big takeaway from the week.

The pontiff of the Catholic Church just tried to contradict Catholic teaching.

You might have missed that in the silly slap fight between the Pope and the execrable Donald Trump.

So let me repeat it for you: the pontiff of the Catholic Church just tried to contradict Catholic teaching.

And not one bishop objected to this...fascinating development.

Is Catholicism nothing more than the cult of the reigning pontiff?

Stakes on a Plane.

Followed by a flop-sweat-soaked Fr. Lombardi and legions of unpaid papal apologists energetically trying to deny the obvious import.

It would be nice if we didn't have to do this every other Alitalia flight, but there you go.

Oh, but this one is genuinely different--it manages to be the worst yet.

Paloma García Ovejero, Cadena COPE (Spain): Holy Father, for several weeks there’s been a lot of concern in many Latin American countries but also in Europe regarding the Zika virus. The greatest risk would be for pregnant women. There is anguish. Some authorities have proposed abortion, or else to avoiding pregnancy. As regards avoiding pregnancy, on this issue, can the Church take into consideration the concept of “the lesser of two evils?”

Pope Francis: Abortion is not the lesser of two evils. It is a crime. It is to throw someone out in order to save another. That’s what the Mafia does. It is a crime, an absolute evil. On the ‘lesser evil,’ avoiding pregnancy, we are speaking in terms of the conflict between the fifth and sixth commandment. Paul VI, a great man, in a difficult situation in Africa, permitted nuns to use contraceptives in cases of rape.

Don’t confuse the evil of avoiding pregnancy by itself, with abortion. Abortion is not a theological problem, it is a human problem, it is a medical problem. You kill one person to save another, in the best case scenario. Or to live comfortably, no?  It’s against the Hippocratic oaths doctors must take. It is an evil in and of itself, but it is not a religious evil in the beginning, no, it’s a human evil. Then obviously, as with every human evil, each killing is condemned.

On the other hand, avoiding pregnancy is not an absolute evil. In certain cases, as in this one, such as the one I mentioned of Blessed Paul VI, it was clear. I would also urge doctors to do their utmost to find vaccines against these two mosquitoes that carry this disease. This needs to be worked on.

Sure reads like an endorsement of contraception in the face of the Zika virus. Interestingly enough, it was the Pope who used the term "contraceptives," not the nefarious reporter.

NO NO NO--HE'S NOT ENDORSING THE USE OF CONTRACEPTIVES HERE, HATEY HATER MCSEDEVACANTIST PANTS--HOW COULD YOU SAY ANY SUCH THING?

I mean, there's just no way that can be read as an endorsement of contraceptive use here, you faithless moron!


Jesuit Father Federico Lombardi, speaking to Vatican Radio about the pope's remarks, said Pope Francis distinguished between abortion and "the possibility of a recourse to contraception or condoms in cases of emergency or in special situations, which does not involve the suppression of a human life, but avoiding a pregnancy."

"He does not say this recourse can be accepted and used without any discernment, but in fact clearly said that it can be taken into consideration in cases of particular emergency," Father Lombardi said.

Pope Francis' reference to the situation in Belgian Congo illustrates how he was not referring to using contraceptives in "a normal situation," but only in situations of serious danger, the spokesman said.

Pope Benedict XVI made similar comments in his book-interview "Light of the World," where "he spoke about the use of condoms in situations where there is a risk of contagion, for example, with AIDS," Father Lombardi said.

Pope Francis said that "contraceptives or condoms, in cases of particular emergency and gravity, can be the object of a serious discernment of conscience," Father Lombardi said, "while on abortion, he did not allow any room for consideration."

HE'S ONLY SAYING CONTRACEPTION IS ACCEPTABLE IN SITUATIONS OF SERIOUS DANG.... 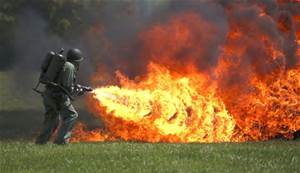 So much for yesterday's vigorous papalist spinning.

So, yeah--the Pope just endorsed contraceptive use for the normal conjugal act.

But it's far, far worse than that. To say that the hypothetical threat of birth defects is sufficient reason for contraception is to authorize it to serve eugenic ends. The threat here is not to the life or health of the mother--the threat is that she may bear a "defective" child.
And put the emphasis on the "may"--the link has not been established.

Take no chances, though. Lebensunwertes leben.

And how does the Pope's argument not apply to the threat posed by all birth defects, from fetal alcohol syndrome on down? Aren't these all "situations of special danger"? Any parent could discern such--Can't risk it.

But keep spinning. People love the guy, and that's what really matters.
at February 19, 2016 7 comments:

"I have seen the future, and it works."


On Monday, the pope prayed before the tomb of Bishop Samuel Ruiz Garcia, former prelate of the diocese of San Cristobal de las Casas, a controversial figure famous for his perceived support for neo-Marxist movements in the state of Chiapas, where a military uprising allegedly inspired by his highly politicized pastoral approach took place in the mid-1990s. Ruiz was reputed to encourage a synchronistic approach to indigenous cultural practices, seeking to promote indigenous traditions rather than teaching the gospel to the locals, and resulting in a mixture of pagan and Catholic practices among the Maya of the region that remains to this day. His emphasis on politics was so strong that the sacraments were reportedly neglected by his activist clergy; membership in the Catholic Church plummeted and 30% of children in his diocese were reportedly unbaptized when he left office. He also publicly associated with notorious condemned exponents of liberation theology, such as ex-priest Leonardo Boff and others.

Ruiz’s activities were regarded as so subversive of Catholic doctrine that he was denounced in a letter to the Apostolic Nuncio to Mexico by Cardinal Bernadin Gantin, Prefect of the Sacred Congregation of Bishops, and consequently asked to resign by the nuncio in 1993. However, he refused to do so and held out until his 75th birthday, submitting his resignation in accordance with the Code of Canon Law in 1999.

The pope’s embrace of one of the major figures of liberation theology in Mexico follows his eyebrow-raising acceptance of Marxist symbols mixed with the figure of Christ in July 2015, when President Evo Morales of Bolivia gave the pope an image of Christ crucified on a hammer and sickle, the traditional symbol of communism embraced by the former Soviet Union. The pope, who brought the image back with him to the Holy See, explicitly acknowledged in a press conference during the trip that the image was the creation of the neo-Marxist Fr. Luis Espinal, who had embraced a form of liberation theology in the 1980s that was later condemned. Although Francis seemed to distance himself from the Marxist intentions of the symbol, his acceptance of the gift was the cause of much consternation in Latin America.


I'd be happier with this whole "freshness of the Gospel [sic]" plan if it didn't have the fetid waft of liberation theology. Fewer baptisms and more activist clerics--sounds like a really bad plan. Unless you're Protestant--who, quelle surprise, have turned out to be the biggest beneficiaries of Ruiz' materialistic and syncretic program.

This time for sure, eh, Rocky?

I appear to have disappeared for two months.

On the bright side, the pipes are fixed. Unfortunately, our basement library's floor had to be jackhammered out, which proved fascinating to the kids--Louis especially.

Our budding paleontologist/martial artist happily exclaimed that our basement "looks like a dinosaur dig!"

30 foot of pipe had to be replaced, at the cost of $175 per foot. That's mostly labor--and back-breaking at that. Fortunately, homeowner's insurance covers it. After they first tried to deny coverage, of course. 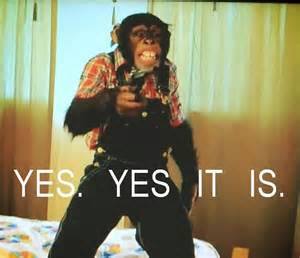 After my plumber called the adjuster up and re-acquainted him with reality, all became well. The cement has been poured and we should have a working semblance of a library shortly. Though we have to have it professionally cleaned and get replacement tile in. Whee.

On the bright side, I did need to rearrange the library anyway--the Late Unpleasantness material was all over the place, and now I'll be able to organize it properly.

Email ThisBlogThis!Share to TwitterShare to FacebookShare to Pinterest
Labels: Personal Trivia Readers Have To Force Themselves To Give A Rip About
Newer Posts Older Posts Home
Subscribe to: Posts (Atom)