Nine awful human beings whose views are unworthy of the slightest respect.

Especially after caterwauling about spending money on Ukraine, not baby formula.

Here's the thing--draft an alternative bill.

Email ThisBlogThis!Share to TwitterShare to FacebookShare to Pinterest
Labels: In The News

I cannot imagine the fear parents are facing with the formula shortage.

We were blessed with the fact my wife was able to nurse all of our children up to about for roughly 13-15 months on average.

While we never had to worry about formula, it was always there. "Breast is best but formula is not abuse" is a proverb my wife routinely quotes to moms facing the nursing vs. formula question. And we know two children who would not be here today if formula had not been an option.

But in 2022, the formula is not there. Especially for babies with digestive issues.

Baby formula is essential for baby growth. Many babies or mothers are not able to breastfeed or have other nutritional needs.

Emrie Colegrove's daughter, Wilhelmina, has a heart condition and uses soy formula. That has been something difficult for Colegrove to find. For the past two months, she has not been able to find the one her daughter tolerated well in stores.

"With her heart condition, calories and weight gain are super important," said Colegrove, "Otherwise, her heart won't heal. So. when you think as a mom, those million thoughts just go through your mind. It's really scary to think that your baby is not going to get the nutrition that they need."

She was able to find a generic brand at one store, which she has been using.

However, she also wants people to understand that the correct formula can be pricey, if it is not covered by WIC. Plus, driving to multiple stores with climbing gas prices adds up.

There are no words.

The FDA just allowed the nation's largest baby formula plant to release specialty formula on a case by case basis.

And the shutdown is especially grating given this fact:

Last month, however, the FDA and Centers for Disease Control and Prevention told NBC News none of the bacterial strains taken at the Abbott plant matched those collected from the infants, and the agencies haven't offered an explanation for how the contamination occurred.

Joseph Cardinal Zen was arrested by the Chinese Reich.

It won't affect the Vatican's concordat with said state, though.

A man who insists on meeting with fascists before visiting their victims isn't going to be moved by different fascists arresting a colleague he pointedly ignored.

[Update: The Cardinal has been released on bail.

The Vatican is "following with extreme attention."

To be fair, "follower" is a apt description of Rome's attitude toward China and its depredations.]

Your personal doomsday clock update of the day.

But my main point of concern here is Putin suddenly calling out the United States, and once again in the form of an old KGB-Kremlin talking point. This is yet another level in Putin’s rising escalation. And as the old KGB political dinosaur continues to stomp and lash out, he’s capable of more violence and destruction. In the past few months, Putin’s various lies against the Ukrainians have been a pretext for him to ramp up his rage by ever-increasing levels of military action. Let’s hope this one aimed at the United States and the West doesn’t result in Putin taking aim in literal ways at the U.S. and the West.

By the way, the official Doomsday Clock is not worth consulting, as the invasion of Ukraine and the rattling of nuclear sabers by Russia is apparently less important than either political so-called disinformation or anti-covid policies in the developed world. In the old days, an event like a nuclear power invading its neighbor would have prompted an update. But the Bulletin of the Atomic Scientists has gone the mission creep route so you have to look elsewhere.

Email ThisBlogThis!Share to TwitterShare to FacebookShare to Pinterest
Labels: Alas Babylon, Our Oligarchs

Burn Tiktok to the ground.

So destroy the app then toss the app coders and abusers into a prison near the Arctic Circle.

It is just and merciful.

Scenes from a nation careening toward the apocalypse:

A Forbes review of hundreds of recent TikTok livestreams reveals how viewers regularly use the comments to urge young girls to perform acts that appear to toe the line of child pornography — rewarding those who oblige with TikTok gifts, which can be redeemed for money, or off-platform payments to Venmo, PayPal or Cash App accounts that users list in their TikTok profiles.

It’s “the digital equivalent of going down the street to a strip club filled with 15-year-olds,” says Leah Plunkett, an assistant dean at Harvard Law School and faculty associate at Harvard’s Berkman Klein Center for Internet & Society, focused on youth and media. Imagine a local joint putting a bunch of minors on a stage before a live adult audience that is actively giving them money to perform whatever G, PG or PG-13 activities they request, she said. “That is sexual exploitation. But that's exactly what TikTok is doing here.”

The transactions are happening in a public online forum open to viewers almost anywhere on the planet. Some of the demands are explicit — like asking girls to kiss each other, spread their legs or flash the camera — and some harder to detect, masked with euphemisms. Commenters say “outfit check” to get a complete look at a girl’s body; “pedicure check” to see their feet; “there’s a spider on your wall” to get girls to turn around and show their rears; and “play rock-paper-scissors” to encourage girls to flirt-fight or wrestle with each other. Phrases like “put your arms up” or “touch the ceiling” are often directed at girls in crop tops so viewers can see their breasts and stomachs. And many simply coax girls to show their tongues and belly buttons or do handstands and splits. In return, the girls are showered with virtual gifts, like flowers, hearts, ice cream cones and lollipops, that can be converted to cash.

As I told a Gen Z man recently, it's an awful time to be a girl or a woman. He agreed. Small wonder, perhaps, that some tragic girls try to withdraw from being a woman altogether, only to open yet another door to horror.

We are doing our literal damnedest to make decadent Rome look quaint, God help us.

Paul Zummo is one of the sanest men on the internet.

And because that is the most back-handed of compliments, let me re-phrase:

Paul is one of the smartest, most-grounded and sanest men around. Period.

Click on the above to read a polite defenestration of anti-anti-abortion sophistry.

Last's morphing into a hack is nothing short of tragic. While I usually have little use for Friedrich Nietzsche, the age of Trump offers ample confirmation for the German philosopher's warning about fighting monsters and gazing into the abyss.

Some of Trump's critics have revealed themselves to be mere mercenary grifters happy to mouth any political ad copy for pay.

Far worse are others who maimed their integrity. Last appears to be the latter, to my sorrow. I profited from reading him. What did I miss in his previous writing that could have signaled what he is doing now?

[And, yes, the same applies to those who have prostituted themselves to support Trump. But the principled anti-Trump Mr. Zummo isn't talking about that now. If you want some of that, go here. Speaking of which, I am about to throw up with the Catholic fawning over MTG. Get a grip. Your integrity needs it.]

Email ThisBlogThis!Share to TwitterShare to FacebookShare to Pinterest
Labels: OPB, Our Oligarchs, Unequal Justice Under Law, Your Hatred Makes You Weak

All over but the mopping up.

The Latin Mass will be dead in Detroit by the end of 2023.

The archbishop has left the Institute of Christ the King parish more or less alone.

But everything else is up to the "lively pastoral charity" (guffaw) of Rome.

This lively pastoral charity is exactly analogous to that of an oncologist toward a tumor, as you have no doubt noticed.

And you can count on Vigneron's successor giving the Institute a long walk of a short plank.

Ah, well--Eastern Catholicism is alive and well in these parts. And at least two of the Churches do not worship the ground the papal office trods.

On a related note: for the first time in 70 years, no priest was ordained for the Archdiocese of Detroit. The Francis Effect, baby!

Email ThisBlogThis!Share to TwitterShare to FacebookShare to Pinterest
Labels: Francis Effect, Our Oligarchs

Christopher Johnson's obituary has been published.

You can find it here.

And while I know it is bad form to copy an entire article, I would like to preserve, however impermanently, the memory of my friend.

Johnson, Christopher (Chris) S., 66, of Webster Groves, passed away on Nov. 7, 2021. He was preceded in death by his parents, Anne Elizabeth Johnson and Dexter Jerry Johnson.

Chris grew up and spent most of his adult life in Webster Groves. He graduated from Webster Groves High School in 1974. He earned a bachelor of arts degree from Fontbonne College in 1983 and then a master of arts degree in library science from the University of Missouri. He spent his entire professional career at the Webster Groves Public Library. Chris’ true passion and joy was his work at the Library. Until his involuntary departure from the Library, Chris was at his happiest there where he served as a research librarian. Anyone who knew Chris knew that he would light up if anyone asked him for help at the library and most remember that his gift was providing help and guidance to anyone who needed it.

Until his death, Chris’ continued devotion to the Library remained unparalleled.

A memorial service is tentatively scheduled for April 23, 2022, at Blackburn Park.

As you read it, you will understand exactly why the memer does not want to engage with questions like life and being.

Just put a heavier jacket when you go through the ice-cold, solipsistic repudiation of solidarity with any other human being, in the womb or directly breathing the polarized air.

And then remember that men have been and still are subject to being coerced into trauma, mutilation and death on behalf of their fellow human beings via the suspended--but not abrogated--military draft. But they aren't women, so who cares?

Just as well that some people aren't parents. 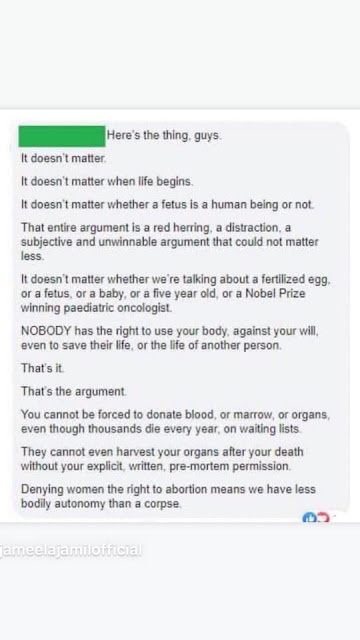 Not a lot of blogging juice right now. Family stress with the move of a child outstate (not on bad terms, but not ideal), so prayers would be welcome.

Plus, not much to say. Don't get giddy about Roe--it was also "overturned" in a draft opinion by Chief Justice Rehnquist back in 1989, and here we are.

There's only so many times you can point out that our blinkered leaders are sending the world straight to Hell in the express lane before it gets a bit old, even for an oblivious, repetitive pedant like myself.

A few good books in my reading rotation, and maybe that will prompt the blogging keyboard back to life.

Speaking of which, if you'd like fresh, accessible translations of Roman classics with an emphasis on Cicero, check out the collection here.

May God grant you and yours peace.