The nadir of Michigan football. 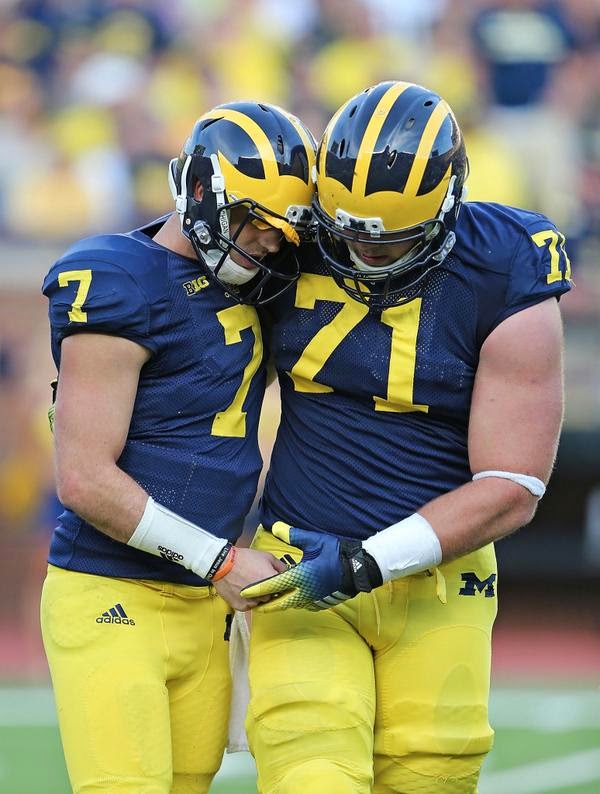 I bleed Maize and Blue, and what happened to Shane Morris on Saturday is inexcusable.

You can credit Hoke's claim to have been watching the pass when Morris was hit. Sure--makes sense. OK, fine.

What you cannot credit is the ignorance of the aftermath, including the lack of specific knowledge of whether a concussion check had been done on Morris.

No. That is bad coaching. It is his responsibility to know. And he didn't. That is bad leadership of the young men entrusted to you by their parents.

No. He has to go, and the Athletic Director has to go with him.

No more. This isn't about wins and losses--this is about the well-being of the student-athletes who play the game. Enough.

...blowing smoke up each other's asses is not a sacramental.

But it sure is popular among Catholics these days, even among smart people: Exhibit MCLXIV.

I saw this on Facebook, and naturally The Scourge sent it with a triumphal, sarcastic fluorish.

It's good news for the people appointed to it, to be sure. But the derisive hoots, which seem to be on the order of "See--the Pope's on an orthodox roll here, lol haters F1 rulz!" are...embarrassing.

In reality, it is the equivalent of being told, after a horrible candidate is elected governor: "Look at these awesome selectmen who won!"

I guess if it makes you feel better, great. Just remember that the purpose of the ITC is to advise the Congregation of the Doctrine of the Faith. And Pope Francis is determined to reduce that Congregation's role.

So a golfer you like won something on the Senior Tour, or a race car driver smoked someone in the Busch Series. Great--but it's not the big time. It's not where the action is. It's going to matter much, much less under this pontificate than it would have back in January 2013.

I'm not sure that's all that great a consolation prize for the Chicago faithful, but you can try it on them.

I know which I'd rather have. I know which one is far more relevant, even with respect to those who don't live in Chicago. And it isn't the composition of the ITC.

For the origins of the delightful "blowing smoke" phrase, go here.
at September 28, 2014 2 comments:

The first is from Thomas Peters, and is grounded in optimism, and little else. A handful of statements on hot-button issues back during Benedict's papacy--and nothing since? Eh. Saying one thing with his words, and contradicting them with his actions. Where have I heard that before?

Well, OK--Peters missed Cupich's visible waffling on the HHS mandate, but that's obviously not helpful to the Ice Bucket/Psych-job Hypothesis.

The second view is from a knowledgeable member of Cupich's diocese who has actually interacted with him, Gonzaga Prof. Douglas Kries. Peters' hopes for a robust defense of Catholicism...are likely to be disappointed, given the actual track record (emphasis added):

Bishop White Seminary at Gonzaga, which was nothing short of an extraordinary success story until Cupich became bishop, fell quickly into desuetude after his arrival. Moreover, when Gonzaga University refused to continue club status for Gonzaga’s campus Knights of Columbus council, Cupich, it is widely whispered, told the remaining seminarians not to discuss the matter with the press. It has also been widely reported that Cupich did not want his diocesan priests involved with certain pro-life groups that he considered too strident. Cupich may not even know it, but at the time, students involved with Gonzaga’s Right to Life Club felt abandoned, even though they were not his direct target.

I once wrote to him expressing in particular my concerns about the direction of Gonzaga’s core curriculum. His reply was polite, but he made it quite clear that he had no interest in involving himself in such matters. Gonzaga adopted, and is now planning to implement, a core curriculum that diminishes the number of courses that students take in “Catholic or Christian religion” from three to one.

The formerly required course on the Bible is being eliminated and the course in applied Christianity, which often in practice meant Christian morality, is being changed to world religions. Gonzaga students, many of whom belong to Cupich’s diocese, will soon be devoting only a single semester course in four years of college (3 out of 128 credits, or 2.34 percent) to the study of “the Catholic or Christian religion.”


The local Spokane newspaper describes Cupich as “a moderate who has called for civility in the culture wars,” since he has said that Pope Francis doesn’t want “ideologues.” From what I can tell, the description is inaccurate. Real moderates engage all sides, trying to find common ground, if it is available, that will permit them to advance their principles. By not inserting his office into conflict situations, Cupich has often, whether intentionally or not, quietly ceded much ground to one side, and without advancing his principles.

"Moderate" is the term progressives usually use to describe either (1) one of their own, or (2) someone who doesn't cause them any trouble. It looks like No. 2 is a good bet. Either way, it's good news for them--and no one else. I imagine there will be plenty of dialogue, though, and the progressives and media (but I repeat myself) will offer the new Cardinal Archbishop no end of plaudits for his inclusive civility.


And that's really what matters, isn't it?

Stock up on bilberries. 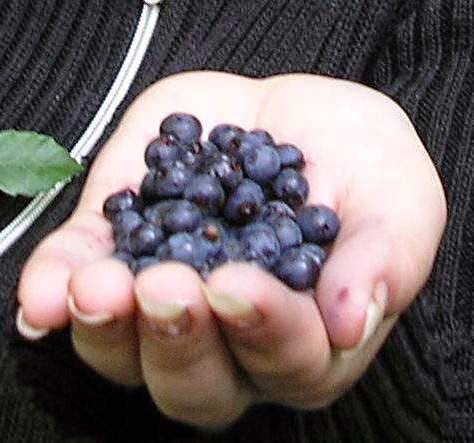 It's not often that I offer health advice here, but I think it's relevant now, what with the bombshell news that Pope Francis appointed Blase Joseph Cupich as the next Archbishop of Chicago.

Now, if you processed that news and are still the proud owner of a foam finger that says "Francis #1!" I don't think this post is for you. In fact, it's really not. In fact, if I post your comment, it will probably be as a sign of how far gone you are.

For those of you taken aback by the appointment of a certified hater of TLM massgoers and pro-lifers--and even Al Kresta!--to one of the most important sees in North America, this post is for you.

An eclipse is at hand, and things are about to get unpleasant for people who think being Catholic has some supernatural value. The bottom lines are four:

*This* is the Pope's vision of the ideal bishop for American Catholics. From that, all else follows.

The nausea you feel is quite understandable. All the wrong suspects are celebrating his alleged inclusiveness (Disclaimer: "Inclusiveness" and "pastoral" are void with respect to Those People Who Still Believe That Shit). Cupich's public record confirms that he's yet another Dad more popular with other people's children. He's Edward Egan, only with pretensions to intellectualism and sans the charm.

Sing a new church. Actually, an old church. That 70s Church, in fact.

2.  Second, the Pope just sent a big signal to careerist clerics: picking public fights with  pro-lifers and traditionalists is no obstacle a-tall! In fact, it's your ticket to the top.

Get ready for some unpleasant displays from priests and bishops, alas. Fallen human nature being what it is.

3.  If you like your bishop, storm heaven for him.

Pray God he's not retiring soon, or otherwise the Wuerlwind is going to deposit yet another touchy, iron-fisted "pastoral" dialoguer on your doorstep.

4.  The hermeneutic of continuity is dead, dead, deadski.

If the Pope was really in tune with his predecessors not named "Paul VI," Bishop Cupich would hit age 75 as the Bishop of Spokane. Pope Francis is a Reformer, and sees himself as one. Unlike Benedict, he's just fine with everything Vatican II did. He's never uttered a cross word about the 21st ecumenical council. Not a one. I'd love to see anything like Benedict's criticisms about V2 (no, not that one...) from him, but they simply do not exist. It was a break with the past, and that's a good thing in his book. To the contrary--the people dwelling in the past are the problem, as he has scolded constantly. And as BJC affirms in this love-fest interview with the National Catholic Reporter (indirect link). This part stands out.

I think that he’s asking us — this is one of things I brought up in my talk in the response to Cardinal Óscar Rodríguez Maradiaga at that conference that we had in Washington last June. I think the pope is giving us a new epistemology, a new way of learning, of knowing — another way in which we’re informed.

The Pope is giving us a new theory of knowledge? And I thought he was just the Pope.

As they say, "after hubris, nemesis."

It is now clear that this is a papacy to be endured and survived. He has little use for anything that proceeded the last ecumenical council, and even less use for those who anchor their spirituality pre-1962. Sure, you can pray the Rosary 'n stuff, but for pete's sake, don't use math!

It's not going to be pleasant. In fact, it's going to feel a lot like the seventies to a lot of you (or the 2000s, if you were in Mahony, Untener, Clark or Hubbard country).

It can be endured, though--just recognize the reality and drop the pollyanna. The Pope wants shepherds who smell first and foremost like him, and not at all like disfavored members of his flock. Pray, build, and stay in contact with the other faithful. We will all need the encouragement and support.
at September 22, 2014 13 comments:

The NFL season kicks off at a disorienting time for us Lions fans--on a Monday Night.

Against the Vile Steve Skojec's Giants, no less.

I have no clear sense of how the Lions are going to surprise and break my scarred heart this year, but they'll no doubt find a way.

I think Jim Caldwell is a decent coach, and probably a sensible change to a steadier hand after the manic Jim Schwartz, who really couldn't find a stable mood for the team. This is a *good* thing, and will be better for the team overall. I like the fact he sounds like "Spock on Football."

They're going to need it, I'm afraid--because I can't see this team doing better than 9-7, with a lot of ups-and-downs. The defense has too many question marks and I'm not sure how Stafford is going to do after last year's miserable passing record down the stretch. Also, I'm worried about Megatron's mileage. He's an Olympian god among men, but he has taken a beating.

Nothing worth soul-searching about or discussing here.

Back to Ferguson and/or your favorite celebrity's hi-jinks.

Yes, it's regrettably overused, and a part of all sorts of self-help (material and spiritual) phenomena, but...it's true.

You should put the first things first.

In my case, what drew me to Catholicism was not the fabulous shepherds, but Christ. Specifically, the Real Presence.

I've been re-learning that of late through this virtually-unknown treatise whose first edition dates from the second decade of the 20th Century. 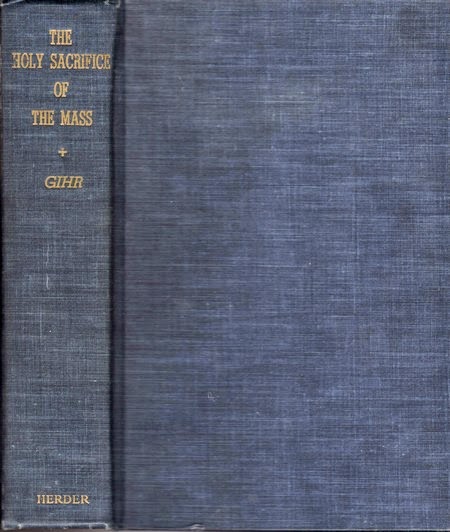 It's...dense and very, very thorough. Too many of the footnotes are in Latin. But it is a real masterpiece, repaying re-reads of each page. I'm only 50 pages in, but I am truly inspired by it. The book starts with a discussion of what constitutes a "sacrifice," examines Christ's on Golgotha and works its way from there. Brilliant, and back in print (not sure which edition) from a reprint house, it is a meditation on the Cross and the Mass. One that deserves to be better known. Tolle, lege.
at September 03, 2014 5 comments: