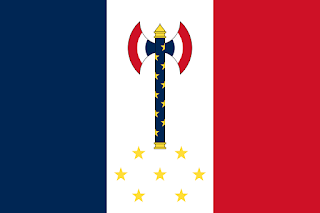 Ah, Villanova's Massimo Faggioli. What can you say about a guy who calls the Holy Spirit "she" and thinks Francis is super, if not radical enough?

A lot, I suppose, but the most important part is that he is a hearty cheerleader for this pontifical era, and hails the secret concordat with the Chinese Reich as "geopolitical repositioning."

No matter the unrelenting persecution wrought on those he is supposed to regard as brothers and sisters under said shameful agreement.

The reality is, Faggioli is quite comfortable with Church-State entanglement--so long as it aligns with his political preferences.

With the right government, Massimo is very, very Vichy.

To be fair, he recently claimed to be able to discern nascent fascism in the world.

No, not in Xi's China. But rather in the phenomenon of Catholics supporting the Trump Administration, which he attempts to describe in this characteristically-loggorheic-yet-empty meditation.

So it should be no surprise that this defender of Vatican-enforced submission to the State insists that an American circuit court judge be subjected to a religious test and her ties to a Catholic charismatic group be explored in minute detail, should she be nominated as a Supreme Court justice.

For the freedom, of course:

Such a request to examine the covenant may seem unseemly to some. After all, the Constitution says that “no religious test shall ever be required as a qualification to any office or public trust.” Catholics and scholars of Catholicism know how important this foundation of freedom is in the history of American Catholics; anti-Catholic bigotry is an old and ugly story in the United States.

But this is not a matter of anti-Catholicism or even liberal bias against conservative Catholics. Barrett’s nomination would raise an important new problem: Is there a tension between forthrightly serving as one of the final interpreters of the Constitution and swearing an oath to an organization that lacks transparency and visible structures of authority that are accountable to their members, to the Roman Catholic Church and to the wider public?

Say what you will about Massimo, but he knows his shell games. He moves from potential concerns about Barrett's group to a general critique about potential problems with charismatic movements in general, never specifying anything untoward about the People of Praise.

And he does so whilst touting about wide-open conscience protections and freedom of thought in the Church...even as he issues oily demands for Catholics to be brought to heel.

Three-Card Massimo can be fun, when you know what to look for.

Meanwhile, membership in the Knights of Columbus has been deemed to be disqualifying by the Democrats' vice-presidential nominee and Massimo was silent. Despite, you know, Knights being open with their vows and being fully in line with Catholic dogma. Because he's already crafted a rationale to smear them, with just a whiff of plausibly-denied racism, of course.

So, yeah, he's happy to see Catholics he doesn't care about get squashed by the State for any reason. He's a sincere partisan. But his arguments here are patently insincere.