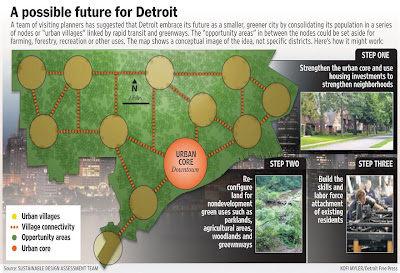 [Graphic created by the Free Press. Click to enlarge.]

The committee suggests that Detroit could recreate itself as a 21st-Century version of the English countryside.

"Isn't that basically what's happening? Even without any plans or strategies?" Mallach asked.

But he added, "It's happening in a sloppy, destructive fashion where you get areas that are essentially abandoned, but they're not useable open space, they're not environmentally sound, so they're basically wasteland."

Instead, the team suggests planning for that future by relocating residents out of distressed areas and concentrating new development in more vital nodes such as Midtown or Mexicantown.

Mallach and his team visited Detroit as part of a program known as SDAT, for Sustainable Design Assessment Team. The SDAT program sends teams of volunteer architects, planners and other experts to a community to help map steps toward a more sustainable future, both economically and environmentally.

The Detroit SDAT team visited the city in late 2008 and has yet to issue its final report. But its draft report has been circulating widely among local community groups and is already stirring debate about its core recommendations.

What do to with Detroit's vacant land has sparked considerable discussion lately. In one prominent idea, businessman John Hantz recently proposed using hundreds or thousands of acres of vacant land for commercial farming.

Meanwhile, the Community Foundation for Southeast Michigan and other nonprofit groups have been working to create more greenways through Detroit's open spaces to link neighborhoods.

Forty (of 139) square miles of Detroit are currently empty. Thinking radically not only is not impractical, it is necessary.

There's a good discussion about the project, pro and con, at a Detroit online forum here.

[As an aside, this is essentially what happened to Constantinople during its last century as a Byzantine city: the once metropolis of 500,000 contracted to 50,000 people living in villages connected by roads and surrounded by ruins.]
at June 16, 2009

Email ThisBlogThis!Share to TwitterShare to FacebookShare to Pinterest
Labels: Motown

My Uncle Robert took a sudden turn for the worse, is unconscious and has been placed in hospice, all in the space of a few hours. My Mom'...