Yes, Virginia, there *was* a Thanksgiving Indult--with caveats.

My respect for Sharon Kabel's research skills knows know bounds. She is the daughter-in-law of my good friend Jon Kabel.

She recently put her unmatched talents for searching the historical record to good use to address the question of the much-discussed "Thanksgiving Indult" of Pope Pius XII, which supposedly allowed American Catholics to keep chowing down on the bird on Fridays after Thanksgiving.

Her verdict--which is supported by her startling ability to sift the archives--is that there may have been one once, or granted here or there, but as a general rule, no.

The only problem with her research is that the best source for researching dispensations is the hard-to-find work of the late Jesuit T. Lincoln Bouscaren. Father Bouscaren was an eminent American canonist and the compiler of the invaluable early volumes of the Canon Law Digest.

The books are fascinating--even for non-legally-minded nerds. They show church tribunals and other authorities wrestling with issues as varied as imaginable, from granting an annulment to a Catholic woman whose husband had himself sterilized two weeks before their wedding to how to translate the Good Friday prayer for the Jews. When I get a moment, I will devote a more in-depth post to the volumes of the Digest and the remarkable material they contain.

In any event, Volume V of the Digest (Bruce Publishing Company, 1963) settles the dispute over the historicity and reach of the Thanksgiving Indult once and for all:

1. Yes, there was a general indult for bishops to grant dispensations on American civil holidays, and it had existed as far back as Pius XI;

2. Yes, there was one specifically available for Thanksgiving--but it was granted either at the tail end of the reign of John XXIII or the very beginning of that of Paul VI;

3. But there was no general, universal indult straight from the Pope--it had to be applied for, and not every bishop did. 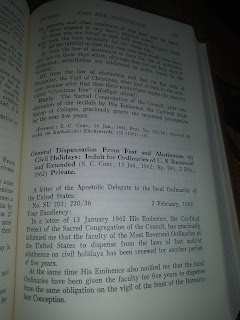 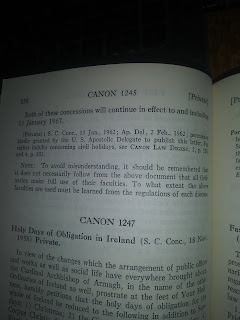 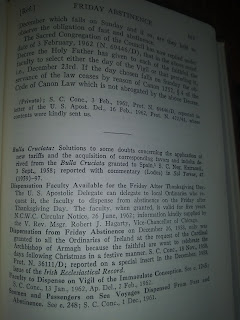 Genuinely good news from the Times-- federal pregnancy discrimination law may finally grow some teeth . I loathe the national Chamber of Com...