At one level, the pearl-clutching response to Ross Douthat's use of the word "heresy" is pretty funny. Do those who are staggering to the fainting couch even believe in the concept of heresy? This is, after all, the enlightened era of the Council to End All Councils. If not, it should be shrugged off like an accusation of lycanthropy. Especially coming from Twitter, for pete's sake. More on that later.

Even funnier is the notion that left-leaning academics--tenured or otherwise--are in any danger of losing their Catholic university posts because of what a conservative writer tweets (!) about them. Far from it--a swat from a righty is a resume'-builder in an educational system that daily burns incense before the smoke-tarnished idol of the Land O' Lakes Statement.

And, really--anyone who's paid attention knows that in this, the New Paradigm of Dialogue and Mercy, the only people losing their jobs and experiencing the disciplinary hand of Rome are those of a more traditional bent. To whit: a Catholic father stricken with cancer and the Friars of the Immaculate.

On other hand, if you think Fidel Castro is an instrument of the Holy Ghost, it's all good.

So, the fears of a New Inquisition against lefties are something out of the Bearded Spock Universe. 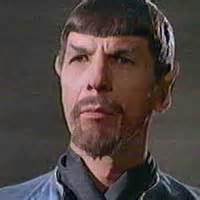 Quite illogical, indeed.
Sorry about the transporter mishap?

Less funny--insulting, in fact--is the argument that no one was trying to silence Douthat.

An open letter to a writer's publisher from a murderer's row of academics stating that the writer is unqualified to opine on the subject for which he is most published--and is hurting people in the process--is not a recommendation to shut him up?

Pull the other one.

All of that, though, is truly beside the point. I mean, I could point out that flinging accusations and questioning another's Christian bona fides might actually be a heartening point of commonality between Douthat and the Pope...brothers in unity after all.

The real problem is that the howls of outrage obscure the bottom line question: is Douthat right? Was Professor Faggioli's assertion heretical?

The handwaving response of Douthat's critics to the accusation suggests they do not accept the concept of heresy.

Do they? If not, then, no, of course not--no one is a werewolf. Why so serious?

If so, show your work and refute the accusation instead of gesturing to your letters, your collar or your tactical interest in civility.

"Tactical"? Of course. I don't recall an open letter to Andrew Sullivan suggesting that his speculations regarding the previous pontiff were out of line, do you? You know--the ones he made over a course of years?

And it strongly suggests that the outrage over Douthat is not only manufactured, but, again, an exercise in BS.