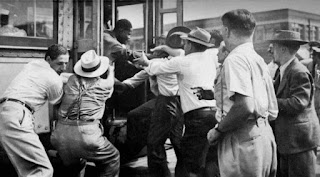 A bit of forgotten history: the 1943 Detroit Race Riot. Here,
whites are pulling black passengers off buses to beat them.

I can't see him as President, but he's a smart man with a history of fearlessly jumping on one of America's third rails:


“White people think of racial violence in a modern context — such as the black riots that erupted in the wake of the Rodney King verdict,” he wrote. “They have no grasp on the history of racial violence in this country — as illustrated by their total unawareness of what Newsweek (Dec. 8, 1997) admitted were ‘two [facts] that every American should know. Between 1885 and 1900, at least 2,500 blacks were lynched or murdered as the KKK consolidated its hold on the post-Reconstruction South. In 1741, 14 slaves were burned at the stake and 18 others were hanged because of fears of a slave revolt— in New York City.’”

Carson cited an example of his own personal history with racial injustice, an arrest of his mother for frivolous charges.

“Too many other incidents of injustice are not merely ancient history, but personal history, even current events, for the majority of black people. I remember in Boston when I was a child, my older cousins, sons of the aunt and uncle who took our family in, were arrested and thrown into jail for some minor infraction of the law. When one of my cousins protested that abuse, he was beaten so severely by the police that he almost died. I vividly remember seeing the results of that beating. A few years ago, when my own mother questioned a policeman who stopped her for a routine traffic violation in a Detroit suburb, the officer angrily told her she met the description of a woman wanted for abducting an elderly couple. He promptly arrested her, had her car impounded, and threw her into jail. I had to call a lawyer friend of mine, a fellow Yale alumnus, who used his contacts as a senior partner in a major Detroit law firm to get her released and to see that the bogus charges were dismissed.”

If his campaign accomplished nothing else, getting more conservative whites to think about racial disparities would be an excellent thing.
Posted by DP at Monday, October 26, 2015