On the other hand...

Using the Defense Production Act could be salutary--if the stuff is made here.

Our bipartisan-forged dependence upon the Sinofascists is one of the reasons we got hammered by the plague. Telling 3M to import more masks from Shanghai isn't going to fix anything. Except the wallets of men whose wallets desperately need thinning.

We can't make our own Tylenol, for the love of pete. And we know it.

I am also curious to see how Biden's "Buy American" plan is going to work, what with economic nationalism not being a shareholder fave.

Which is why you are going to get four years of neoliberal log-rolling like this.

Hat-tip to Don for the find. 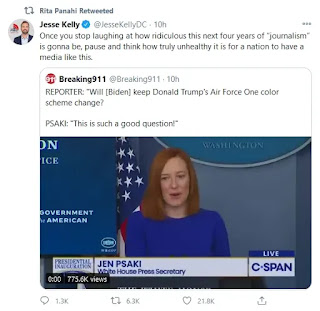 Email ThisBlogThis!Share to TwitterShare to FacebookShare to Pinterest
Labels: There's No Substitute for an Honest Free Press

According to data from Mental Health America (MHA), however, more people are facing deteriorating mental health. From January through September of 2020, the number of people who have taken MHA’s anxiety screenings has increased by 93 percent over the entire previous year. The organization’s depression screening has seen a 62 percent increase over 2019’s totals. Before the year was even over, more people were trying to find out if they were suffering from anxiety or depression than ever before.

MHA isn’t the only organization with data pointing to the mental health impact of the pandemic. A survey from the Kaiser Family Foundation in July 2020 found that 53 percent of adults said the pandemic had a negative toll on their mental health. Data collected from the CDC found that 41 percent of adults experienced symptoms of an anxiety or depressive disorder in December 2020, compared to 11 percent in January-July of 2019.

It can be seen in the increase in overdose deaths.

And the preliminary statistics on suicides are frightening, too.

Email ThisBlogThis!Share to TwitterShare to FacebookShare to Pinterest
Labels: Coronavirus

One playoff win in my 51 years on the orb.

So the two newest passengers on the Detroit Lions' Carousel of Derp (a/k/a "the Hell-Ride Without a Paddle!") have boarded.

Any assessment is nearly pure speculation, but there are a few scraps of info which suggest a direction, if nothing yet about the quality of the leadership.

First, new GM Brad Holmes was full of praise for Matthew Stafford, if non-committal. That is good, given that there are teams who need a veteran QB and the Lions are short of draft picks thanks to the previous regime. He deserves better than yet another rebuild and his value will never be higher.

And yes, I said "rebuild" despite Holmes expressly disclaiming the term "rebuild." Because in the next breath he recogized that the defense is atrocious. Because it is--historically so. That ensures that some level of rebuild is in the offing.

You want additional proof that the team is resigned to a rebuild, whatever else they want to call it?

Campbell has a six year contract. That's a roll-up-your-sleeves-for-the-handyman-special kind of deal.

Again. But I am so very, very, very slightly pleased with the fact that the necessity has been recognized.

Affirm what can be affirmed and advise that principled opposition may be necessary.

That, and a Pauline offer of prayers.

Seems a reasonable pastoral statement from the head of the USCCB.

Email ThisBlogThis!Share to TwitterShare to FacebookShare to Pinterest
Labels: In The News

So the first guy Biden boots is the African-American Surgeon General.

And he passes over the next in line to fill in as acting--and she's a female career civil servant.

Oh, and the full-time replacement will be a male Obama retread.

Sure, sure--we'll mouth your platitudes.

And then we'll do what we want.

What are you going to do about it?

Yeah, that's what we thought.

Email ThisBlogThis!Share to TwitterShare to FacebookShare to Pinterest
Labels: HR World, In The News

Can't go target shooting when it will run you a buck a round to perforate the paper.

I mean, I've seen people rejoicing when they find Tulammo, for pete's sake.

And no, it's not a good time to get a reloading press, either.

Email ThisBlogThis!Share to TwitterShare to FacebookShare to Pinterest
Labels: Firearms, In The News

So Kwame gets his sentence commuted by the Bad Orange Man.

Like many things the outgoing President has done, dubious.

But I can't work up any outrage about it. A big part of it is that Kilpatrick's story has always struck me more as a tragedy than anything else. He had everything going for him...and he threw it away in hubris.

Hopefully he's learned something--and if he hasn't, he still can't run for office in Michigan for another 13 years, anyway.

Email ThisBlogThis!Share to TwitterShare to FacebookShare to Pinterest
Labels: In The News, Motown

Policies like Secretary Levine's led to unnecessary deaths of vulnerable elderly people and unnecessary separation of the elderly from their families.

Not that Secretary Levine's elderly mother was subjected to the same policies, because of course not.

The mindset which drives "Insider trading" applies to much more than stock portfolios.

Thus, the "oligarchs of the people" will always have better for themselves than they will for the common herd.

And make no mistake--they look out for each other, as this incarnate Peter Principle moment demonstrates.

Email ThisBlogThis!Share to TwitterShare to FacebookShare to Pinterest
Labels: Powers and Principalities, Priorities of the Ruling Class

The Moral Compass of a Neoliberal.

I mean, the title says it all: Mao fangirl is now a senior advisor for Biden.

To be fair, those Chinese were backwards rural types--literal peasants.

If they wanted food, they should have thought of that before they chose the career path.

In any event, the destroyed were definitely not well-connected members of consulting and mergers/acquisition firms who cozy up to the ruling party.

Still, it's nice to know what kind of murderousness is acceptable in polite company.

Maybe we'll see the Mao ornament return to the White House Christmas tree in 2021, too!

And I suppose we have a little data on how tough Uncle Joe's new management is going to be on Red Chinese trade chicanery, too.

Email ThisBlogThis!Share to TwitterShare to FacebookShare to Pinterest
Labels: History, In The News

Thought of the day.

You can't 'speak truth to power' when you have enlisted with the powers that be.

On the other hand...

Using the Defense Production Act could be salutary --if the stuff is made here.  Our bipartisan-forged dependence upon the Sinofascists is o...