My three cents on Ted Kennedy.

In the spirit of "if you can't say something nice..."

Cent number 1: In our house, Eunice Kennedy Shriver is going to be pointed to as the model of how a Catholic public figure should behave.

Take an extra spin around the lake for all of us today!
Posted by DP at Monday, August 31, 2009 No comments:

Yeah, me too. Hence the break. Don't know if I'd call myself "recharged," but I have some book reviews in the hopper, so that's still on stream.

That, and having a NY Times Bestselling author call your blog "entertaining" in his newest volume is a bit of a motivator to try to entertain.

So, expect two reviews this week. The first is Death of a Pope, and the second is The Sword of the Lady.

One more thing this week, rather more personal: I have a CT scan scheduled for my rebellious lungs, so any prayers/good thoughts you have on that one would be greatly appreciated. A specialist reviewing your x-rays and telling you it's "probably nothing" lacks that certain certainty in the reassurance department.
Posted by DP at Monday, August 31, 2009 No comments:

Email ThisBlogThis!Share to TwitterShare to FacebookShare to Pinterest
Labels: Book Reviews, I Want a New Lung, Inside Blogball

My much better half...

Has a math games and/or toys bleg.

She also has the ideal suggestion for the next Elmo toy. Photoshops welcome.
Posted by DP at Friday, August 21, 2009 No comments:

Email ThisBlogThis!Share to TwitterShare to FacebookShare to Pinterest
Labels: The Child-Bride

Not bad at all.

But I see your Julius Caesar Rap and raise you Seven:

Email ThisBlogThis!Share to TwitterShare to FacebookShare to Pinterest
Labels: Only One Shatner, OPB, Youtubed

Because I can, that's why.

There will never be anyone remotely like William Shatner ever again.

Email ThisBlogThis!Share to TwitterShare to FacebookShare to Pinterest
Labels: Culture, Only One Shatner, Sci-Fi, Technology Enriches Our Lives, The Classics, Things Musical, Wine Women and Song, Yes I Overdid, Youtubed

I love this picture.

It's the helpful arrow and legend that do it for me.

"Oh, right there in the middle, the thing with the spiraling white bands and all. Thank you--I might have missed that."
More seriously, prayers for anyone in the path of this one--looks like the Atlantic just cooked up its first monster of the year.
Posted by DP at Wednesday, August 19, 2009 No comments:

Email ThisBlogThis!Share to TwitterShare to FacebookShare to Pinterest
Labels: Idiocracy Watch, In The News, Oooookay

Happy Feast of the Assumption!

One of those "weirdly Catholic" things that never gave me a moment's pause during my conversion. Other things did, but the Assumption just made sense. To celebrate, some El Greco for your approval. 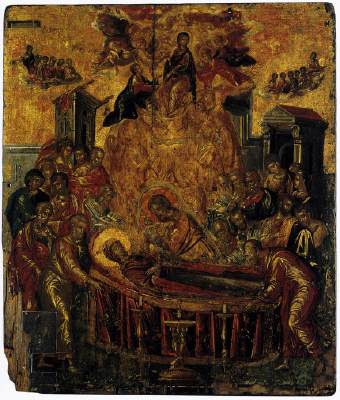 The Dormition of the Virgin by El Greco. Very, very early, and showing a more directly Byzantine influence. Some time before 1567, when he left his native Crete for a decade in Italy. 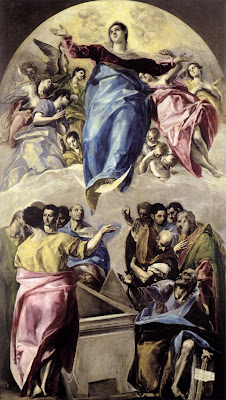 The Assumption of the Virgin, also by the hand of Domenikos. Completed in 1579, and definitely the mature Toledan EG we all know and had better love if we chose to comment on the Greek hereabouts. :)
Posted by DP at Saturday, August 15, 2009 No comments:

The Feel-Bad Read of the Year.

Then again, it has to be.

I finished William Forstchen's One Second After about a week ago, and it's stuck with me since.

Barring the development of a marked smartening and sense of civic-mindedness by our current awful political class, it will probably haunt me to my grave.

Sadly, this is one of those books which make you wonder how close you are to having dirt shovelled on your coffin.

Actually, OSA makes you think you would be lucky to get a coffin of your very own.

[Warning: Slightly spoilery, but nothing big.]

The premise is simple, and timely: someone--terrorist, rogue state or false flag operation by a more "responsible" state actor--detonates a thermonuclear weapon high above the continental United States. It's not a whodunnit because that's irrelevant.

What is relevant is that in a matter of seconds, the electrical grid, computer networks, telecommunications, and almost all modern vehicles are disabled. "Fried," in a quite literal sense. All over North America.

Ponder that for a moment. The proper response is "despair."

Forstchen sets OSA in his hometown of Black Mountain, North Carolina, just to the west of Asheville. He even includes his current employer, Montreat College, in the tapestry. And a tapestry it is. One of the great strengths of this book is Forstchen's deep love for his adopted home, its people and their culture. While he doesn't whitewash anyone's prejudices or limitations, his affection for the area hooks you in. You not only want to root for these people, you probably would enjoy living among them.

Which makes the book all the more wrenching. Without giving too much away, Forstchen says that two inspirations for his book were Pat Frank's brilliant Alas, Babylon and the crushing film Testament. Thus, I was forewarned to expect downbeat. Good thing.

OSA focuses on John Matherson, a retired Army Colonel and history professor at Montreat College. Matherson has two daughters, the youngest of whom is an insulin-dependent diabetic.

In a nod to Alas, Babylon, Matherson is speaking with a good friend at the Pentagon when his phone and lights go dead. He soon learns his car won't start and he quickly realizes he can't hear motor vehicle traffic or see any planes overhead.

The horror dawns, and he quickly warns the local government, which acts with remarkable vigor and foresight. As do the resilient locals. The book follows the community as it struggles with everything from dwindling medications, the disintegration of regional law and order, the spread of disease, the plight of helpless refugees, the rise of a local warlord and a desperate battle against a cult-army which is led by a man who claims God has abandoned America to the hands of Satan--and the cult leader has Lucifer's direct dial.

It is a quick, but difficult read. Each small inventive triumph by the locals (who are better placed than most on the Eastern Seaboard to survive, complete with access to ancient "redneck" vehicles and parts which are impervious to the pulse) is followed by a half-dozen new problems, at least two of which are frankly insoluble, no matter how clever you are and how determinedly you band together and work at them.

The books ends one year to the day of the attack with another nod to Alas, Babylon: the (mechanized) cavalry rides into town. With the same news delivered to the surviving Floridians in Frank's masterwork: the world as they knew it has ended, never to return.

The little details show the care Forstchen put into the work, such as the effect of tens of millions of people having to go cold turkey off their anti-depressants (and anti-psychotics). That was an element I hadn't considered, but Forstchen did. (Hint: the effect is not good.)

It's a book that you must read, even if I have a hard time "recommending" it. It helps if you have a taste for the dystopic and/or post-apocalyptic.

To their eternal discredit, the Bush Administration and Republican Congress did little to address this problem through 2006, and the divided and Democratic governments which followed did exactly the same.

A pox on all of them if they don't act. One second after an EMP attack is one second too late to do anything about it. Here's hoping OSA helps people think about and work to prevent this horror in the same way works like Alas, Babylon and Testament helped people think about and work to prevent nuclear war.
Posted by DP at Friday, August 14, 2009 No comments:

From the Trail of Tears to Robert E. Lee, Jesse Owens, Joe Louis and Max Schmeling.

One of the great joys of having kids is being able to try to pass on all of your accumulated education in a short period of time. Such as when she is sitting in her booster seat while you are taking her to the last day of Science Camp.

We made another excursion to the Detroit Institute of Arts yesterday. Whilst chasing Louis around (Wide! Open! Spaces!), I stumbled upon this find by Thomas Hovenden in the DIA's matchless American art wing, In Hoc Signo Vinces: 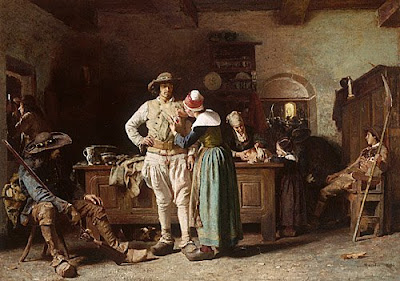 I double-took, and recognized exactly what period of history it depicted.

How about you--from what almost universally forgotten event in history is this painting based upon? Here's a hint: look carefully at the sign being sewn on his jacket.

It's a spectacular work in person. Hovenden was a great one--he's also responsible for the powerful and more-famous Last Moments of John Brown.

Update--Here is the insignia being stitched to the man's vest: 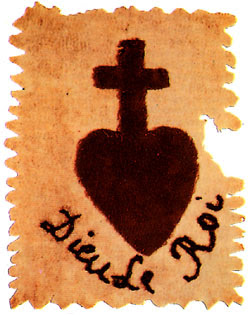 Answer: The Revolt of the Vendee, and the subsequent genocide, the first of the modern era, done in the name of a secular ideology. The first of a very, very horrific string.

Email ThisBlogThis!Share to TwitterShare to FacebookShare to Pinterest
Labels: Catholica, History, It's The Arts

One week, perhaps, but not this week.

I can't recommend coughing until you black out. Not at all. Especially with a hard floor beneath you.

And yes, I have been to the doctor. Thrice. Getting tired of medicine that sorta works. I just spent a week in New York, and it didn't get better, so it's not environmental, which is a slight reassurance while I hear everyone else except Rachel have sporadic hacking fits.
Posted by DP at Monday, August 10, 2009 No comments: