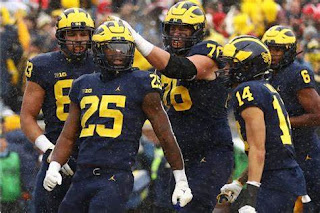 Running Back Hassan Haskins (No. 25): Five touchdowns and a Michigan legend.

As sharp-eyed readers may recall, back in September I described Michigan football as a "pit toilet" despite an early ok start.

That was mostly based on the following fact: the Wolverines can't win what had become the Buckeyes' Game at the end of the year.

And the team I saw--running the ball like something out of the Ten Year War days (my first football memory was Michigan beating OSU in 1975)...that's not going to work against a bunch of speedsters playing NFL-level offensive ball who can dial up points at will.

Honestly, The Game had become an annual exercise in crushing-disappointment-to-utter-humiliation. Absolutely the latter over the last two games (a corona outbreak killed last year's game, mercifully-so given how crap Michigan was).

Imagine the Red Sox vs. Yankees rivalry before 2004: that's what it had become.

A rivalry mostly in the minds of the consistently-beaten.

And after the Wolverines blew a two touchdown lead over the clearly-tougher and more-motivated Michigan State Spartans, this year's match-up was another foregone conclusion, one I grimly sat down to watch with zero hope, and carefully-policed to douse any embers of deceitful hope that may start to ignite.

But somehow...this version of the Wolverines hammered, mashed and clawed their way to victory. 294 yards rushing, 169 of it from Haskins. Three sacks and 15 (!) pressures from DE Aidan Hutchinson, and a back-breaking sack from David Ojabo.

Yet, I didn't let the embers ignite until the Wolverines scored their last touchdown with 2:17 left in what was once again, The Game.

It's a rivalry again. And I feel like the six year old cheering at the Zenith in the living room again.

But here's hoping that Michigan plants its feet back on the ground today. Because they are headed to utterly-unfamiliar ground: the Big 10 Championship Game. And Iowa gives me bad nightmares from the past.

Your sports weekend was not this bad, I assure you. Even if you rooted for OSU.

I'm pretty sure the tats are temporary, so at least there is that.

But genuine props for going ALL OUT--and in the opposing team's stadium, too.  Dude, you are definitely a diehard fan. 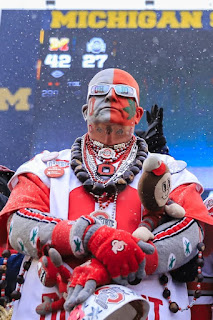 Hat tip to MGoBlog for the find.