My Much Better Half and I saw our first movie in a theatre in more than two years. 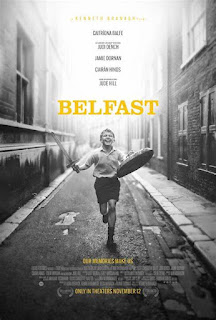 But it seemed longer. Heather and I didn't get to the theatre much before the apocalypse, as being the shuttle drivers for the various activities of our unsocialized homeschoolers limited our options and frankly, energy, for Yet Another Drive.

Yet, when Amy said Branagh's look at growing up in Belfast during the beginning of The Troubles was worthwhile, I thought: "Why not? We liked going way back when." So we did--after our shuttling duties and other commitments ended at 9pm.

We had the whole place to ourselves.

I have liked Kenneth Branagh since I popped Henry V into the VCR back in 1990. Whether in front of the camera (the underrated noir homage Dead Again), or behind it (Cinderella and--yes--Thor), he produces. One of these sets of days, I'm going to watch his four-hour Hamlet.

See above comments re: shuttle runs. It is possible--we managed to watch Lonesome Dove over the course of a month a while back.

In Belfast, Branagh remembers life in a mixed neighborhood of the titular capital of Northern Ireland from August 1969 through Easter 1970. It starts off idyllic, with the eight-year-old Buddy Branagh slaying dragons with a wooden sword and trashcan shield, and then chatting with all his neighbors as he responds to the relayed call from Ma to come home.

Then the pogrom begins. The windows of their Catholic neighbors' homes are broken out by a rampaging mob of "fellow" Protestants who finish the rampage by detonating a car.

I use "fellow" advisedly, as it is clear that Ma and Pa are only culturally Protestant and not hatemonger material. Nor are Buddy's more observant paternal grandparents, played to perfection by Judi Dench and Ciarán Hinds, inclined to hate beadsqueezers. Indeed, even the fire-and-brimstone preacher Buddy and his brother Will hear one Sunday inveighs sweatily against damnation in general terms, leaving the papists out of it.

I mean, in the reverend's circles it's presumed that practitioners of popery have punched their passes to perdition.

And yet, the fact the reverend hammers the congregation for its own sins and does not even mention Catholics after The Troubles erupt is probably more noteworthy than I originally thought. He even gets a great line at the end about remembering a deceased family member.

The Troubles strike as the Branagh family faces its own troubles: a nearly-unpayable tax debt forces Pa to work (sporadically) in England as a tradesman, straining the marriage as the two Branagh boys become unruly. Pa increasingly wants to move the family to England because of better economic opportunity, which slowly materializes as he impresses his English employer.

As the neighborhood turns into a walled enclave, Pa also wants to get out for reasons of safety. A pair of local Protestant slobs radicalize into UVF types and start threatening the moderate Protestants as well as Catholics. Pa has no truck with them, threatening to kill their leader after he tries to extort Pa. But it becomes clear the UVEffers are becoming ascendant, with all that entails.

Nevertheless, Ma repeatedly balks against the very thought of leaving for any reason. She is rooted in this Belfast neighborhood. It is home and nowhere else is. And she is right, and quite persuasive.

That is, until it no longer is home--not any more. No matter how much you wish it were otherwise.

For Buddy and the family, the theatre (stage and screen) is an escape, and Branagh films the theatrical depictions in color: Chitty-Chitty-Bang-Bang, One Million Years B.C. (which annoys Ma considerably, for some reason), A Christmas Carol. Everything else--including the TV--is black and white.

It mostly works, though the reference to High Noon (which Buddy watches on TV) is a bit too heavy-handed in a later scene.

But the odd moment or two aside, Belfast hangs together beautifully. Branagh conveys a sense of place, of roots, of a neighborhood where the commonalities outweigh sectarian differences--right down to betting the horses and waking deceased loved ones in the home. They're all Belfast Irish, Protestant or Catholic. It does not matter.

Until, one horrible summer, it did--and the old neighborhood slowly died.

All of the main players--newcomer Jude Hill, Jamie Dornan, Caitriona Balfe, the aforementioned Dench and Hinds--are superb. And yes, my fellow Americans, the Ulster accent, while not Glaswegian, takes some getting used to. However, you will understand everyone after some exposure.

The film ends with a dedication to all of Belfast--those who left, those who stayed, and those who were lost. Go see it--it is well worth whatever you spend to see it on the big screen. The theatre will certainly be happy to see you, too.

Afterwards, make sure to appreciate your own neighborhoods.

Someone finally solves the "Is Die Hard a Christmas movie?" argument.

And that someone is me. The answer is: "No, of course not." My reasoning: “Set at Christmas” does not "a Christmas movi...