Once is happenstance, twice is coincidence and three times is enemy action.
My McCain yard sign has been vandalized three times in this election cycle. I could say four, but that time was the result of goofy kids trying their best Evel Kinevel impression using a two by four off the curb.
Twice the wire has been bent so you couldn't read it and Saturday I found it laying on the ground. No, it wasn't windy and after the first two times I made sure it was hitting bedrock.
Our neighbor found hers in a puddle across the street.
None of this crap happened in 2004. On the bright side, they are leaving our "No on 2" sign alone. Maybe Doug Kmiec is doing drive-bys... 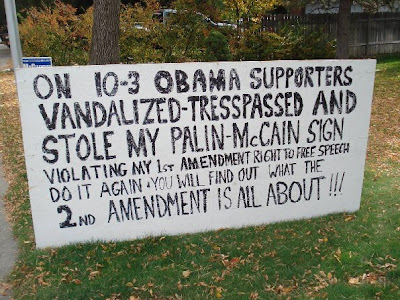 Anecdotal, but somewhat cheering: the number of McCain yard signs is still growing in this neck of the woods, despite the campaign pulling the ripcord a few weeks back. And one of our good friends up the street, a Kerry fan in '04, has no yard sign this cycle.
at October 20, 2008