Amy Pawlak incurs the wrath of the American Protective Association.

I'll disagree with the charitable Amy on one point--Malkin has some explaining to do with this canard:

"His [Pope Benedict XVI] primary concerns are not the sovereignty and security of our country. Open borders benefit Catholic churches looking to fill their pews and collection baskets. The Vatican and American bishops, led by radical L.A. Cardinal Roger Mahony, have long promoted immigration anarchy and lawlesness."

Let's unpack that opening statement a bit. Besides the yessirre, dirt-poor Latinos just ante up to the rafters every Sunday nonsense, that is.

American sovereignty is being threatened by the actions of the Pope, who wants to fill the pews with papists from way down south.


That's the old dual-loyalty charge, disinterred and waved at the papists. If you're with the Pope, you're against American sovereignty. I'm sorry, but the rabid commenters gone wild are taking their cues from the first paragraph.

I have my problems with the American bishops stance on immigration, which is high in muzzy-headedness and low in addressing the legitimate concerns of American citizens. I don't think a blanket amnesty is mandated by the Gospel, nor is building a border fence an affront to almighty God.

But flamethrowing like that seen in the Malkin comboxes is familiar. Catholics have heard this tune before and won't dance to it. Italians, anyone? 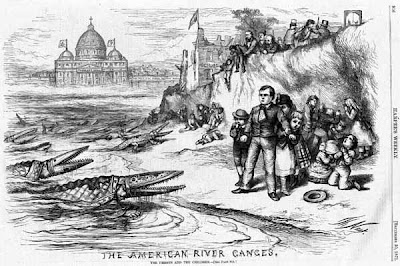 Benedict XVI and Roger Cardinal Mahony, leading the flock across the Rio Grande.

I don't believe for a minute that Michelle Malkin is an anti-Catholic. But she would do well to disassociate herself from rhetoric that is.