It's a dystopia, you twit.

[Expect a series of book reviews to follow over the next couple of weeks.]

Looking a feel good beach read for the summer? A nice, light lark? Something to make you laugh? A Cary-Granty/Katherine-Hepburny thing? 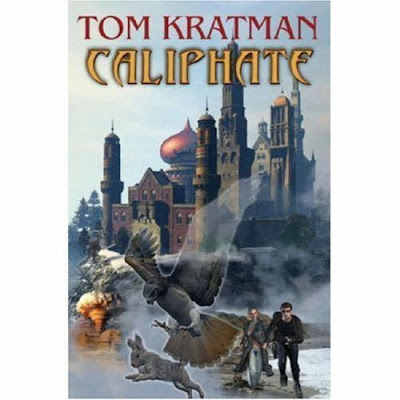 is NOT the book for you.

Caliphate is 1984 for the Blackberry Generation, an insistent, over-the-top and bellowing demand for the Western world to wake the hell up. If I could summarize it in a modified proverb, it is this: an ounce of even semi-benign prevention is worth a megaton of vengeful "cure."

Caliphate is actually three stories in one, with an essay by the author at the end. The bulk of it follows three protagonists, one American and two Germans (though Deutschland no longer exists as such), who live in the first decade of the grim 22nd Century. The American is a graduate of the Imperial (yes, you read that right) Military Academy at West Point, first a soldier then a spy; the Germans are a brother and sister who are literally Catholic dhimmis in the European Caliphate of the title, with the brother a forced inductee into the Janissaries and the sister being sold off for prostitution (after an interval with a decent Muslim father and daughter).

The second story (described with the header "Interlude") follows two residents of Germany, one Egyptian-born and one native, from 2003 through 2021. The Egyptian emigrated to escape Islam while the native is a devout believer in multiculturalism and a reflexive despiser of America.

The third book is called "Excursis," and is the shortest. It sits right in the middle of the narrative and explains the transition from our world to the hell of the 22nd Century. The following is a summary:

The pivot point is September 11, 2015, when Boston, Kansas City and Los Angeles are destroyed by nuclear weapons smuggled in by Islamic terrorists. Four other nuclear weapons either "fizzle" as dirty bombs or fail to detonate at all. By the time the fallout settles, 4 million Americans are dead. For what happens next, Kratman relies heavily on this essay by Lee Harris, who argues that such a catastrophic event would awaken America the Ruthless. Remember the America that firebombed Dresden and Tokyo?

Now picture that America with SLBMs.

The election of 2016 sees the landslide election of President Pat Buckman (yes, Kratman avoids the subtle), who campaigned with the catchphrase "Those motherf---ers are going to pay."

As it turns out, the MFers are more than the nations supplying both the terrorists and support for same--it includes the domestic hard left as well. An...inventive use of the Presidential pardon power results in the summary execution of hundreds (most notably a professor named "Montgomery Chamberlain"--again, hint, hint, along with a dig at a "Mark Moulas"), the Constitution is amended seven more times, Muslims are rounded up and deported and hundreds of thousands of Americans flee abroad, most to Canada, which proves to be only a temporary refuge.

On September 2019, following an ultimatum to the Islamic world and North Korea, the Tridents fire and a 200-to-1 vengeance is wrought for the Three Cities Attack. Canada unwisely takes in a huge number of Muslim refugees, some of whom successfully stage a retaliatory raid across the border...

By 2113, the title of President is better understood as "Augustus," as a de jure American Empire rules the Western Hemisphere, either directly or through Latin satellites. Other allies include Britain, Japan, Australia and the Phillipines (which is in the process of annexation and the ethnic cleansing of its Moro population). In fact, it's safe to say that Kratman's American Empire is a deliberate tall finger of fellowship extended to leftists who reflexively prattle on and on about America as an imperial force.

In the rest of the 22nd Century world, we see that the Chinese have reinstituted the Celestial Kingdom, the Russians have a Tsar, and Boers (leavened by bitter ethnic European exiles) run South Africa again (a whiff of the Domination, methinks). The non-radioactive parts of the traditional lands of Islam have a Caliph, as does the former Western Europe, which was swamped by Muslim refugees. In a shocker, the Balkans are a war zone, this time between the Euro Caliphate and the Russian Empire. Switzerland survives as a permanent garrison state, leveraging its financial capital status to maintain forces sufficient to hold off its hostile neighbor.

All of the large nations are in a state of war with each other--the only question is whether the bullets and bombs are actually flying. While still the strongest power, the American Empire is shackled by the burden of maintaining a massive military, and questions are finally being asked (without reprisal) about whether the damage done to the national soul and heritage is worth the security.

Oh, and the remainder of the book involves the American spy trying to infiltrate a Caliphate biological warfare project that is engineering a potentially world-killing version of smallpox.

With a book like Caliphate, you are drawn to it more for the premise than the actual plot of the book. You could blurb it as "Imagine military sci-fi written by Lee Harris and Mark Steyn!"

But is it any good? Yeah, it's fine, a sturdy what-if technothriller/cautionary tale. The villains are pretty much indistinguishable, the American hero is likeable if a little flat. However, the characterizations of the tragic dhimmis and the two protagonists in the Interludes are very good. One of the minor characters, a general in Chinese intelligence with an interesting secret, has some of the best lines and the only comic relief. As I said, it is a very grim world. Some parts seem to be clear homages to Steve Stirling's Under The Yoke, though it's clear Kratman didn't care for the ending of that one. As the topic indicates, it is leavened a lot of violence and a considerable amount of sex, not all of the latter consensual, so consider yourself warned.

As to the morality of the premise, Kratman makes it crystal clear that he's not revelling in the world he has created. That's critical. If reading The Iron Dream has taught me nothing else, it's to watch out for bloody-minded mean streaks in sci-fi. A frequently repeated line by various of the 22nd Century characters is "what a sh---y world." It is also clear that a century of pitiless warfare has warped the societies in which the characters have been raised and warped them in the process. If the Muslims are portrayed as fatalistic, so are the Americans, who excuse their brutality by claiming that they have no choice. Evil acts are depicted as evil, regardless of whether the bad guys or the less-bad bad guys are doing them. Muslims are portrayed sympathetically (one of whom behaves in a saintly manner). Buckman is described as a gore-caked monster, and America's retaliation as the greatest mass-murder in history. It is a world far more congenial to the old paganism than it is to Christianity. In fact, there's a suggestion that Norse paganism has seen a revival.

Is it remotely plausible? Well...that depends on what you think of the accuracy of the Steyn thesis and the figures he's basing them on. As has been pointed out by commenters here, Steyn's figures are questionable, to put it politely. Kratman speeds Islamization along by swamping Europe with refugees from the American slaughter. I'm willing to excuse plausibility problems in direct proportion to the quality of the writing, and Kratman can spin a good yarn. I'll say that Europe sure seems to like its snooze bar.

Plot holes/errors: Again, depends on where you fall on the Steyn thesis. Unless I missed it (quite possible), the resolution of the Iraq War is left unexplained. While a savage response to a nuclear attack is likely, I don't know that America would go the full Buckman. How the Caliphate would be able to support a remotely plausible biological warfare program after a century of decline (their cellphone network went kaput before the start of 22nd century) is dubious. Indeed, the basis for the economic viability of the Caliphate is not at all clear. Furthermore, the Caliphate has had nukes for a long time--why didn't it try to fight fire with fire? One of the characters has a Marcionite understanding of the Old Testament which was a little grating. Oh, and this--China and Russia are on the same demographic railway Western Europe is, so how powerful would they be when the book kicks off?

Finally, the real villains of the book aren't Muslims. They are leftist multiculturalists, or what Kratman terms "transnational progressives," specifically those who thwart any credible assimilation efforts, back down before the bullying of Muslim extremists and betray the moderates at the drop of a hat. For all the thermonuclear fire in the book, Kratman's recommendations in the concluding essay are common-sense and moderate: boot out the extremists and assimilate the rest. The latter requires (1) forthright protection of Muslim women, (2) offering genuine economic opportunity to those in the ghettos and (3) unrelenting defense of real national virtues. He's not optimistic about this happening in Europe, and the trends aren't good.