Just another day with the 1st Minnesota. 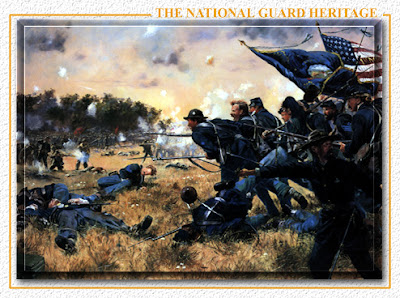 Terry McAuliffe, former DNC Chair and unapologetic defender of partial birth abortion, is about to be honored for his selfless devotion to and efforts on behalf of the Catholic Faith by being admitted to the Knights of Malta.
Once again, those laboring in the trenches to uphold the Gospel are about to take a shiv between the shoulderblades. Once again, the unfaithful get front row seats while the laborers in the vineyard are told to shut up. This is of a piece with the detonation over the Buffalo Deacon's homily (poor, poor "Brian," whose remarkably base political whoredom is noted here) and the Archbishop of Washington's studied refusal to directly address life issues with any Catholics in public life. Yes, the Church's leaders preach one thing while coddling the opponents within her ranks.

Imagine a French Director's Cut of The Prodigal Son, where the younger son returns home to schtup hookers in Dad's bed, kill all of elder brother's livestock and announce that he's building a shrine to Ba'al in the family room. All the while Dad shakes his head sadly and counsels that "the only response is a good example." That's pretty well where we are.
And you know what? I'm not sure how much I care anymore. Sure, at one level I am outraged. But on another level, I'm thinking "What else is new?" I started lowering my standards concerning morally coherent Catholic leadership in 2002, and I haven't stopped since. And, you know what? I'm happy to report that they come closer to meeting my expectations every year. Bishop-proofed faith--the key to peace of mind.
Too cynical? Perhaps.
So try it this way: Generally speaking, our leaders preach the right thing, but almost never act on it. For whatever reason, they are cowed by the enemy.
And yet.
That does not make our cause, our Faith, any less just. We do not worship bishops, priests, deacons or their equally dismaying lay equivalents with advanced degrees and/or tenure (gloria in excelsis Deo). "Do not put your trust in princes" applies to Church leaders, too. All we can do is keep fighting. Yes, we'll pay the price because of the gross negligence, cowardice and, yes, sometimes even treacherous malice, of our leaders. We'll have to pay a steeper cost later because they couldn't do the right thing earlier. But such are the breaks. We have it on good authority that we are soldiers, but we are not guaranteed good generals. Fight anyway. It makes a difference to the Commander in Chief.
[Update: I found a link I was looking for. Want to know how in the bag for the abortion lobby he is? McAuliffe refused to let Democrats for Life have a link on the DNC website. Share and enjoy.]
Posted by DP at Tuesday, January 30, 2007