The hands on the wheel.

Via Insight Scoop, a revealing essay at Commonweal by a practitioner of interfaith dialogue expressing his frustration with "brusque" Benedict. Timely, as the rhetorical cricket bat had started to collect dust.

Holy Lord, it's a trainwreck, in all its fascinating, jack-knifed, twisted metal glory. Bullet-pointing:

I. Its touchstone is the Regensburg address, but the critic (Fr. Francis Clooney) specializes in Hinduism. Under the circumstances, it would have been nice had the magazine come up with a Catholic expert on Islam. Throughout, one gets the distinct impression of a baker offering advice on plumbing problems. It also results in the essay having some serious structural weaknesses, as will be noted below.

II. Though the year is yet young, the following is a certain medalist in the Silliest Catholic Quote of 2007 competition [emphasis added]:

While few sensible Christians would be so brusque today, the question of the meaning of Islam for Christians is still with us, particularly if (by tradition, habit, or conviction) many Christian leaders avoid speaking of the Qur’an as revelation or of Mohammed as a true prophet.

Despite a yeoman's effort to infuse the passage with tuchus-covering ambiguity, the bolded section is still a humdinger, as we Michigan fundies are wont to say. Rub your eyes all you want, but it's still there--he's tsk-tsking at Christians who refuse to speak of the Muslim holy book as "revelation" and Muhammad as "a true prophet."

That's because (1) it's not and (2) he isn't. For "Christians" to believe otherwise is to worship a god who at his best meanders pointlessly like Grandpa Simpson and at his worst gibbers like a patient suffering from end-stage dementia. There's no sane way to harmonize the make-or-break claims of each religion. As an aside: Not that that daunts the dominant fruitbat wing of Piskiedom.

III. Somewhat nitnoid, but perhaps not, given that it provides insight into his arguments: Manuel II Paleologus lived from 1350-1425, not 1234-84 as Fr. Clooney claims. This reveals considerable ignorance about the historical background of the life and times of the Emperor and his writings, and a complete lack of awareness concerning the relentless Muslim Turkish war machine he battled against his entire adult life. These facts shed essential light on Manuel's "brusqueness." 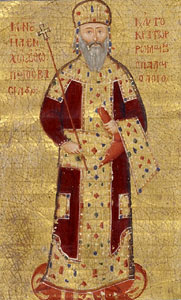 Manuel II: "Devshirme--it's bad for children and other living things."

As for style, Benedict has tended to brusqueness not only in the older documents mentioned above but even as pope. In his justly praised 2005 encyclical, Deus caritas est, he is rather sweeping in his characterization of pagan religions, offering his criticisms without any helpful footnotes. While explaining Christian eros, he proposes “a rapid overview of the concept of eros past and present,” summarizing and, to some extent, depreciating the Greek view of eros, a judgment supported by several phrases from Virgil’s complex Tenth Eclogue: “Omnia vincit amor” (love conquers all) and “et nos cedamus amori” (let us, too, yield to love). Greek and Roman ideas about eros appear merely a foil to the excellence of the more complete Christian understanding. But Benedict then makes an even harsher judgment on “the pre-Christian world,” possibly meaning the ancient Near East. “The religions,” he tells us, are guilty of a “‘sacred’ prostitution” wherein eros is “celebrated as divine power, as fellowship with the divine nature.” The pagan reverence for goddesses is a cover for sexual excess, and their so-called ecstasies are nothing but “the degradation of man.” Providentially, the biblical tradition is implacably against such tendencies: the “Old Testament firmly opposed this form of religion, which represents a powerful temptation against monotheistic faith, combating it as a perversion of religiosity.” With remarkable candor, Benedict describes the Old Testament as taking up arms against pagan views when it “declared war on a warped and destructive form of [eros], because this counterfeit divinization of eros actually strips it of its dignity and dehumanizes it.”

Experts on Canaanite and neighboring religions are nowadays considerably more circumspect in judging religions about which our knowledge is only very fragmentary. The Hebrew Bible does indeed speak harshly of those religions, but the prophetic polemic behind such condemnations is an insufficient basis for any fair and full understanding of ancient religions, their practices, and their attitudes toward gender. While Benedict is making a truly positive and valuable point about Christian eros, was it really necessary to judge the old religions (and perhaps their modern counterparts) so harshly?

You'd have to have a heart of granite not to laugh at that one--Sympathy for the Ba'al. Hoo, boy.

Additionally, there is a surface contradiction in its view of what revelation is--the Koran is to be regarded as inspired, but "the Hebrew Bible" has to be discounted because it's too polemical. But it is consistent, when you think about it--if your view of revelation is that the Muslim scriptures can be worked into the mix, you don't exactly have a high view of the concept from the get-go. At this point, you might as well toss in Alice Toklas' brownie recipe. Why not? You'll sure get a "transformational" feeling. Not to mention the munchies, but there's always a price to pay for enlightenment.

Back to the point: Yes, I suppose it's remotely possible that those who followed the Canaanite gods were communal egalitarian pacifist vegetarians who lived in harmony with nature. But I think I'll skip the screening of Dances With Dagon when it comes out.

Now to the useful bit:

Yet how this prayerful dialogue is to occur is not clear if we reflect on it in light of the sharper positions enunciated in Dominus Iesus. That 2000 CDF declaration argued for the centrality of Christ and his salvific action, interpreted in integral relationship to the full set of church teachings on God, salvation, faith, ritual, and the role of the church itself. While defending a place for ecumenical and interreligious dialogue, Dominus Iesus insists that no element of the integral Christian faith can be sacrificed merely in order to treat religions as equal.

Nor are our hopes raised when Dominus Iesus offers stark ground rules for dialogue: “Equality, which is a presupposition of interreligious dialogue, refers to the equal personal dignity of the parties in dialogue, not to doctrinal content, nor even less to the position of Jesus Christ-who is God himself made man-in relation to the founders of the other religions.”
Similarly, in the twentieth-anniversary Assisi document cited above, Benedict approvingly cites John Paul II’s strictures: “The fact that we have come here,” John Paul said, “does not imply any intention of seeking a religious consensus among ourselves or of negotiating our faith convictions. Neither does it mean that religions can be reconciled at the level of a common commitment in an earthly project which would surpass them all. Nor is it a concession to relativism in religious beliefs.” Benedict affirms this to be the mode of dialogue intended by Nostra aetate: dialogue is sincere and positive, but it is not seeking consensus, not negotiating our core convictions, not believing that religions can be reconciled for some larger human goal, and not a concession to relativism. The truly positive statements Benedict makes about dialogue simply cannot be read without also recalling these stern assertions about the founders, beliefs, prayers, and rituals of other religions, and stern judgments about dialogue as good people, even good Catholics, attempt it in a less than perfect world.

Just so. The fact that some who are engaged in the field of interreligious discussions feel themselves in "a bind" when faced with the Church's limits reflects a skewed set of priorities. The prime mission of the Church is not dialogue, but evangelization, the preaching of Christ to the whole world, in season or out. Any dialogue has to recognize and be governed by the strictures of the Gospel and the Church's mission, not the other way around. Given the minimal (not to mention offhand and vague) references to evangelism in the essay (you have to look hard and with a generous eye), one could easily and understandably come to the conclusion that Fr. Clooney regards the evangelizing imperative as an embarrassing impediment to the really important stuff--namely, what he does. Which is why I found the essay to be strangely comforting--the frustration with the limits means that the man in the wheelhouse is an alert one.

Finally, a dose of irony. Namely, that brusqueness gets results--a group of esteemed Muslim scholars responded to the Regensburg address with a measured essay of their own. Oddly, this development merits no mention in the Commonweal article.

Email ThisBlogThis!Share to TwitterShare to FacebookShare to Pinterest
Labels: B16, Byzantium, OBH Church