Never a dull moment in suburbia, I'll say that.

Friday night, as I'm getting the kids down for bed, telling them a rollicking tale of adventure, I hear a knock at the door. Heather answers. Probably the next door neighbor, I figure.

I hear, muffled, Heather's part of the discussion. Then the door closes, and I can tell Heather's stepped out.

Afraid she might have been waylaid by some hard sell, I walk out to the front step and Heather's there, talking with a somber-looking man about our age holding a desperately injured white-and-grey cat.

The man, named Julius (changed to protect the innocent), saw the cat get hit and has been walking down the street trying to find the owner or arrange to put it out of its misery. It's voiding its bowels and blood's coming out of its nose.

Maybe you can help, he asks apologetically.

Yes, I have a 12 gauge handy. The local Finest will respond to that blast with some disapproval, though. My .30-30 could be passed off as a car backfire, but it's in storage up north. An unplanned ricochet would also earn me a police tsk-tsk.

I get spare towels and Heather takes the poor animal into her arms. I get Julius a cup of our finest coffee and start scanning the yellow pages for "E-Z wounded Animal Snuffing" and suchlike. We're all a little put out by this situation, as the cat continues to twitch in Heather's arms. Julius tries some small talk. Turns out he's a plumber in a rental up the street, and had been coming home when he saw the horrible scene. He digs the coffee, but I admit I was feeling a little put upon.

Julius: Mmmm! Goshdarn, Dale--This is some serious gourmet stuff! Usually, I would be happy with some freeze-dried Taster's Choice right, but he springs this serious GOURMET stuff on us! What flavor is this?

Me: Knock it off, Julie.

Me: I don't need you to tell me how frigging good my coffee is, okay? I'm the one who buys it. I know how good it is. When Heather goes shopping she buys CRAP. I buy the gourmet expensive stuff because when I drink it I want to taste it. But you know what's on my mind right now? It AIN'T the coffee in my kitchen, it's the dead kitty in my family room.

Julius: Oh, Dale, don't even worry about that...

Me: No, No, No, let me ask you a question. When you came walking in here, did you notice a sign out in front of my house that said Dead Kitty Storage?

Me: Did you notice a sign out in front of my house that said Dead Kitty Storage?

Me: You know WHY you didn't see that sign?

Me: 'Cause it ain't there, 'cause storing dead kitties ain't my frigging business, that's why!

[Editor's note--Above scene may not accurately depict the small talk, but rather the writer's internal thought processes at some point. Whatever is actually the case, it will certainly make it easier for him to sell the book.]

I find an after-hours animal hospital about 15 miles away which offers to euthanize and dispose of the poor creature for free. We wrap the animal in towels and put it in the front seat of Mr. Buick. Julius, a genuinely nice guy, thanks me, promises me a six pack and carries the cat to the car.

I drive to the hospital, speeding along the 9-Foe, as we hip suburbanites refer to I-94, talking to the cat all the way. Twice, in moments of zombie horror, it actually summons the will to stand up before collapsing back on the towels. I pet it gently, and the head feels cool. Poor bastard. A beautiful animal, too, well-taken care of with glossy fur.

I get to the hospital and rush it in. Being a cat person, I say if there's anything that could be reasonably done to save the animal, I'd be willing to consider it.

I wait. And wait and wait. "The doctor will see you now."

The veterinarian is a veteran, as it turns out--a graduate of Annapolis. He sits me down and gently explains that the cat will probably make it.

There are no broken bones, and the blood leaking from the nose was from a cut. No nerve damage, and while there is fluid in the chest cavity and the cat is laboring to breathe, he is getting enough air. Lung bruising will heal quickly. What you are seeing is shock for the most part. However he was hit, it was nowhere near as bad as it could be.

Then comes the hard sell: You've done more than expected as a good Samaritan. I'll give the cat a painkiller regardless, but if we keep him, he'll get turned over to Animal Control tomorrow morning, and there's an 80-90% chance he'll be euthanized in 4 months.

OK, I get it. He's a veterinarian--he didn't enter the profession to see an animal die needlessly. Fine--I'll take it home with us. Besides, somebody has to be missing the animal by now. They give me a box with a liner and I bring the lucky twerp home with me. Heather is both surprised and not surprised at all when I say I have to get the cat.

He's doing fine. By midmorning Saturday, he'd already jumped out of the box. Molly is making her Very Unhappy Cat Noise, but the Visiting Cat (as I insist on calling him) keeps a respectful distance.

Saturday morning proper, Heather and I went Minivan Hunting and found this: 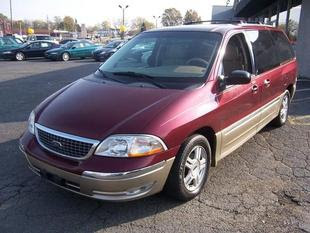 A burgundy/gold 2001 Ford Windstar SEL. More mileage than I'd normally care for but one owner and very well cared for (little underside rust) with an immaculate engine. And at about 5/8 of the surprisingly high Blue Book value. Heather likes it a lot--two power sliding doors, good cargo space, strong engine, good sight lines, pop-down parental rear-view spy mirror (discovered by me after the fact), leather interior and 6 CD stereo. Oh, and a diagnostic package telling you how the oil and electrical systems are working. Sold! Actually I had her at "power doors"--her response: "You sure know how to sweet-talk a girl!"

We were able to go to Mass as a family on Sunday for the first time in about a month, which was long overdue.

Oh, and we used it to go to the library and hang up "Found Cat" signs along the way. No calls yet.

Email ThisBlogThis!Share to TwitterShare to FacebookShare to Pinterest
Labels: Family Fun, Pets, The Money Pit/Cars, The Price Center for the Study of Death-Defying Cats