"The power is in the moustache."

--So spake a waggish and entirely tongue-in-cheek Lions fan in trying to explaining the Motor City Kitties' rise from Leno punchline status this season. "The moustache" is a reference to Matt Millen, whose seven year OJT process as general manager is finally seeing hints of spring.

It's not Harold Snepsts powerful: 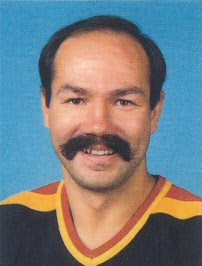 but really, whose is? 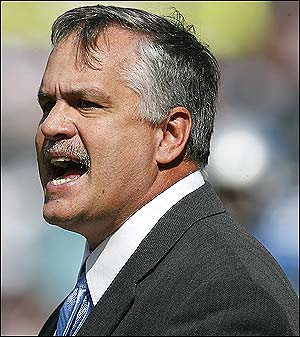 It's a fine 'stache nonetheless. If nothing else, he has an assured future as a cop. More seriously--he's actually due some credit: the unheralded free agent talent has really paid off this year.

Why are they 5-2? The defense has been, two glaring exceptions aside, much better than anticipated. The offense is (sorry Kev and other fantasy leaguers) getting some balance, with the reemergence of Kevin Jones as a feature back. Perhaps most importantly, the cancerous lockerroom has gotten a dose of Marinelli chemo, with the purging of discontented talent. Tatum Bell is the most recent example, having been relegated to inactive status after complaining about Jones getting "his" carries.

Is this team good? Depends on what your definition of "good" is. Ultimately, no, it's not good. Not in the sense of being a legit playoff vehicle. But it is much smarter, more energetic, more cohesive and flat out unembarrassing to watch than anything we've seen since the Gary Moeller Era. I'll take it.