Before the Walls of Constantinople.

With all due respect and admiration for Chuck the Hammer, I think the victory at Tours is a bit overblown. Yes, it was important, and yes, it was impressive (the Franks' only advantage at the battle was in leadership--they had Martel and the Arabs didn't). But Tours was actually the last in a string of three victories that secured Europe from Muslim inroads until the fifteenth century.

The first, and most important, occurred in A.D. 678, before the land and sea walls of Constantinople:

After the death of Constans II, his young son Constantine IV (668-85) came to the throne. This reign inaugurated a period of significance for world history as well as for Byzantium: it was a time during which the struggle between the Arabs and Byzantines took a decisive turn....

[The Caliph] Muawija had been settling the disputes in the Caliphate and he was now able to resume once more his attacks on the Byzantine Empire. In 663 the Arabs again appeared in Asia Minor and during the course of the next fifteen years they made annual raids. The unfortunate countryside was ravaged and its inhabitants carried off to slavery; on occasion, the invaders even got as far as Chalcedon and they frequently wintered on imperial territory. But the fight for the possession of Constantinople itself, the really decisive battle on which the fate of the Empire hung, took place at sea. 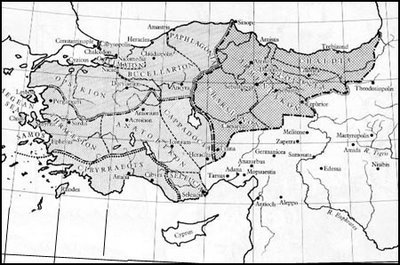 Map of Byzantine Asia Minor, ca. mid 7th Century. The places referred to in the text are on the western and northwestern coasts.

While he was governor of Syria, Muawija had been occupied with plans of conquest, and as Caliph he now resumed operations at the point where he had had to suspend them more than ten years before. The Arabs held Cyprus, Rhodes, and Cos, and Muawija completed the chain of islands by the capture of Chios, and in 670 one of his generals seized the peninsula of Cyzicus in the immediate neighbourhood of the Byzantine capital, thus providing him with a useful base for an attack on Constantinople. Meanwhile, before delivering the final knock-out blow against the very heart of the Byzantine world, part of his fleet had occupied Smyrna in 672 and another section of it occupied the coasts of Lycia and Cilicia. 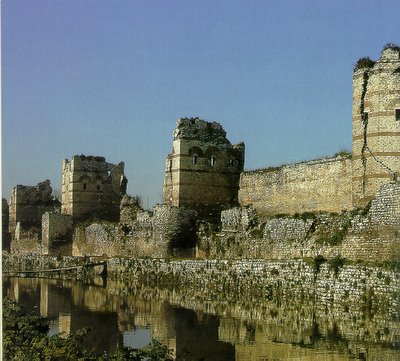 Another section of the Land Walls, with intact moat.

The main action began in 674 when an imposing squadron appeared before the walls of Constantinople. The struggle went on all through the summer, and in the autumn the Arab fleet retired to Cyzicus. Next spring it appeared again, and throughout the summer the Byzantine capital was in a state of siege. The same proceeding was repeated during the following years, but all the efforts of the Arabs to take by storm the strongest citadel in the world were doomed to failure.

A section of the Sea Walls (which has fewer intact sections).

They were forced to abandon the attempt, and in 678 they left Byzantine waters after having suffered sever losses in various naval actions fought beneath the walls of Constantinople. Here, one of the most useful Byzantine weapons was used for the first time. This was the famous Greek fire, invented by Callinicus, a Greek architect who had migrated to Byzantium from Syria; it was a mixture of explosives whose formula was known only to the Byzantines and by means of an instrument called a "siphon" it could be hurled against enemy ships from a great distance, causing devastating fires to break out. 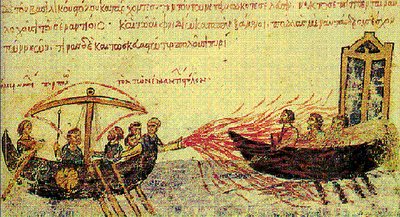 Greek fire in action, from a Byzantine manuscript.

In retreating, the Arab fleet suffered still further losses in a storm which it encountered off the Pamphylian coast and at the same time the Arab forces in Asia Minor were heavily defeated. The aged Muawija therefore found himself compelled to conclude a thirty years' peace with Byzantium and he agreed to pay the Emperor 3,000 gold pieces annualay and to send in addition fifty prisoners and fifty horses....

And indeed the significance of the Byzantine victory of 678 cannot be overestimated. For the first time the Arab advance was really checked and the invasion which had swept forward as irresistibly as an avalanche was now halted. In defence of Europe against the Arab onslaught this triumph of Constantine IV was a turning point of world-wide historical importance, like the later victory of Leo III in 718, or Charles Martel's defeat of the Muslims in 732 at Poitiers [Tours] at the other end of Christendom. Of these three victories which saved Europe from being overwhelmed by the Muslim flood, that of Constantine IV was the first and also the most important. There is no doubt that the Arab attack which Constantinople experienced then was the fiercest which had ever been launched by the infidels against a Christian stronghold, and the Byzantine capital was the last dam left to withstand the rising Muslim tide. The fact that it held saved, not only the Byzantine Empire, but the whole of European civilization.