Buy this DVD, appropriately entitled 9/11. It started off as a documentary by two French brothers, Jules and Gedeon Naudet, who wanted to film the development of a "probie," or FDNY probationary fireman, from the academy to full time status. They lived and worked with Engine 8 Ladder 1 in Manhattan for several months, following the progress of Tony Benetatos, the probie, as he learned the ropes.

Engine 8 is seven blocks from the WTC site, and the cameras were rolling on the morning of 9/11.

It would have been a fine documentary without the epochal event, but it is a truly essential work now. It contains the only footage of the first attack, and of the command post in the North Tower (repeatedly punctuated by the horrible crash of bodies hitting the ground). Furthermore, records the collapse of both towers at point blank range (the first from inside the Tower). It also has the last footage of Fr. Judge while alive, and the firemen carrying off his body.

See it--the bravery of the FDNY shines throughout. 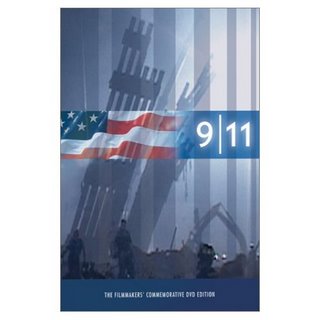