Byzantium in the News!

But the Holy Father referred to a dialogue written by the great Byzantine Emperor Manuel II Paleologus in his speech at the University of Regensburg yesterday.

The last of the Paleologi were tragic figures in the classic sense, brave and gifted men who lacked the resources to ward off the inexorable doom that faced them and that culminated with the fall of Christendom's bulwark of Constantinople in 1453.

Manuel II (reigned 1391-1425) was probably the most gifted of them, being a man of letters as well as a brave and capable leader. It was Byzantium's great misfortune that he ruled about "one emperor too late" to save the Empire as a regional state (his father, John V, was at least partially responsible for two ruinous civil wars during his reign). He also holds the distinction of being the first Byzantine Emperor to visit the West (outside of Italy), engaging in a diplomatic tour to obtain assistance from such places as France and England. 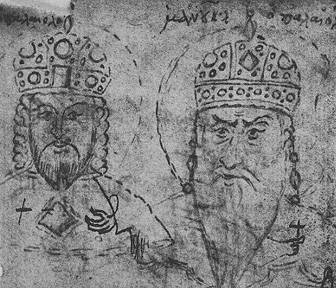 [Update: Oh, and yes, the Manuel II quote is remarkable. Especially when you consider that Benedict XVI is a careful thinker and speaker, and his full awareness of the probability of controversy by using it. I'm still mulling it, and will have more later. Thoughts are welcome, of course.]

Email ThisBlogThis!Share to TwitterShare to FacebookShare to Pinterest
Labels: B16, Byzantium