I was really hoping for Basil II or John I, but this will suffice.

There weren't any options for "[allegedly] blinding large numbers of Bulgarians" or "crushing Abbasid armies," so that should have been my first clue I wasn't getting either. 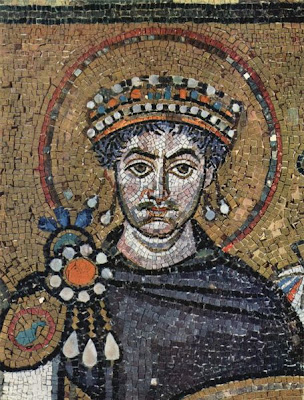 In the sixth century, Justinian accomplished the brief recovery of the empire’s old territory in the east, in Africa, and in the west. His victories, however, were hard won over the course of decades, and they came at a great cost in human life, not to mention taxation. Paradoxically, Justinian’s military successes probably contributed to the empire’s subsequent decline. The conquered lands were hardly secure, and many were lost in the years after his death. During his reign there was a great flowering of Byzantine culture, whose monuments remain in Istanbul (e.g., Hagia Sophia) and Ravenna. His reconstitution of Roman law, the so-called Justinian Code, is still the basis of civil law in some modern states. Justinian is venerated as a saint in the Orthodox Church.

Find out which Byzantine ruler you are at The Way of the Fathers!

BTW, I'm going to quibble with the point about Justinian's conquests exhausting the empire. Justinian's military campaigns more or less paid for themselves with the capture of the Vandal and Ostrogoth treasuries. What really led the Empire into decline was the black plague sweeping through the Mediterranean twice during his reign. Without one of his reconquests (Africa), Byzantium would have been dead and buried by 630 AD.

Thanks to Peter for e-mailing me this find.