Elegy for a dream. 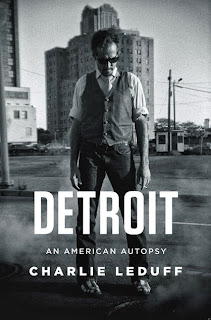 Charlie LeDuff's beautiful and haunting Detroit: An American Autopsy is marketed as a journalist's-eye-view of the tragic plight Detroit has descended into over the past decade. Indeed, it is that--but most readers may be missing the lede if they blip over the adjective in the title.

Because the Pulitzer Prize-winning LeDuff's larger point is that Detroit is not unique: it has simply arrived at its current, nightmarish state earlier than the rest of the country. Gawk at the trainwreck all you like--but the odds are, you're riding on a parallel track.

As he told Stephen Colbert in his interview, "Detroit is what happens when the money runs out."

I like to joke, channeling Tina Fey, that "I can see Detroit from my house!" That's actually true--from the second story, I can see a billboard on the Detroit side of the notorious Eight Mile Road, Motown's northern border, separating it from the suburbs of Oakland and Macomb counties. I graduated from the University of Detroit-Mercy Law School, work in Detroit proper, and have for more than a decade. Many of my neighbors are working class blacks who have decamped from the city as the spiral has worsened.

And has it ever worsened--please note that the book came out before the City filed the largest municipal bankruptcy in history.

LeDuff's book is not a history of "how we got here." Rather, it is a chronicle of the city as it is, in its mortal hours, along with a sort of homecoming on the part of the author. LeDuff, who was raised on Joy Road in next-door Redford Township, engages in a personal and familial taking stock, with family dysfunction and tragedy mirroring that of the city itself.

That last may be the most haunting of them all, because LeDuff spares no one in his analysis--not even himself. He indicts his generation for mocking what made their fathers successful:

What our generation failed to learn was the nobility of work. An honest day's labor. The worthiness of the man in the white socks who would pull out a picture of his grandkids from his wallet. For us, the factory would never do. And turning away from our birthright--our grandfather in the white socks--is the thing that ruined us....Instead of working, we figured we could be hustlers and salesmen and gamblers and partiers. Work was for suckers. If anybody had told us such a thing existed, we probably would have become New York bankers and stockbrokers. And I have no doubt we would have been good at it too. Work versus The Hustle. That was the internal conflict on Joy Road, USA.

It is a story with precious few (but genuine) heroes, and even fewer victories. The heroes are the honest folk: firemen in delapidated stations without toilet paper, police detectives who have to take the bus to homicide scenes, residents struggling to get blight removed, a brave mother who tries to find peace after the death of her daughter and, yes, even a freelance political consultant who cuts through the insanity to explain the realities on the ground.

The victories in Detroit happen when the honest folk keep manning their stations and performing their duties despite the fact everything around them is crumbling. And because of that, occasionally justice is done. Very, very occasionally. But just staying at the station is usually the most you can hope for.

And if you think it can't happen anywhere else, I would simply ask you to consider the possibilities of a nation whose decks are awash with mounting debt, and whose social dysfunctions are not different in kind from those of the once-great Motor City. If it stays with you long after you have finished it, then you read it correctly.
Posted by DP at Saturday, October 12, 2013