[Bumped up, 10/15/08: OFA is curious about reactions to the Catholic stuff (and probably the book overall. Take this opportunity to fire away!] 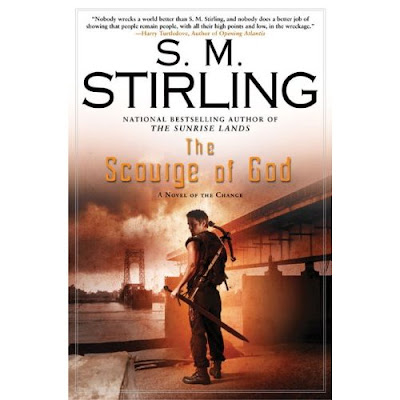 The Scourge of God is the second book in the second Changeverse series. Originally a trilogy, the "Rudiverse" is now going to be a tetralogy.

Thanks to the consistent (indeed, increasing) quality of the books, that's good news indeed. The old world continues to pass away, and the new generation continues to rise to the fore.

The Scourge of God ranges widely across the changed (rimshot!) landscape of western North America, from southern Idaho to the banks of the Andui--er, Mississippi at Dubuque.

When we last saw our heroes (adventures like this call for the old standby) they were fleeing the chaos following the climactic battle between the "United States" centered at Boise and the army of the Church Universal and Triumphant. The CUT, for those of you not in the know, is the theosophist cult of bad guys centered at Yellowstone which has taken pretty much the worst features of every religion in history and wrapped it in a gnostic overlay of deadly-serious gibberish.

Led by Sethaz, the adopted son of Unabomber Ted Kaczynski, the CUT is determined to rid the world of all technology that requires more than a wheel turning another wheel or a wheel turning a shaft. And that's a quote. It also is bent on subjugating women and establishing master and servitor races through selective human breeding. Oh, and they have ties to some pitch-dark powers and can fight like fast zombies. Yes, aim for their heads.

Which brings me to the first substantive point. For all of the hints of the fantastic/cosmic at work in the previous books, TSOG raises the ante considerably past "hint." The Cutters are being wielded by Something very dark, while our heroes are being guided. That, in fact, is the crucial distinction between the two. We have mercifully few encounters with the Cutters, but all of them bear the hallmarks of the diabolic. They are quite literally possessed at points in the narrative. The assistance given to the good guys is indirect, save in one case that should be near and dear to the hearts of mackerel-snappers everywhere. And even then, it's analogous to a blessing. The heroes remain themselves.

The second substantive point is that the narrative works at a good clip, showing us the aftermath of the battle (a tactical "American" victory over the Cutters, who suffer their first grievous losses in combat). The protagonists have to liberate their captured friends and escape the Cutter dragnet. Also, the parricidal dictator in Boise has to be avoided and groundwork laid for his overthrow. Things do not go well--at all--and central characters suffer debilitating injuries and barely evade capture at the hands of the Cutters who are determined to slay Rudi Mackenzie at all costs. Noble Buddhists, sardonic Sioux and a bat-guano crazy Iowan despot all combine to steer the path of our heroes eastward. New characters join and/or assist, with clear significance for the future. If you can't see a coalition being built, I can't help you. There's considerable character development quietly occurring within the Fellowship, especially with Odard, who is becoming very complex.

It doesn't entirely focus on the Fellowship of the Bear. The Corvallis Meeting fields an army to pre-empt the Cutters from establishing a bridgehead to threaten the Willamette states, which leads to a desperate battle between the Meeting and the new Cutter/Boise alliance. Beloved characters remain: Juniper clings tightly to her conscience, the demands of power nothwithstanding, Astrid is still insane/brilliant, though she has a horrific run-in with the darkest powers of the Cutters, Little John Hordle still eats like a hobbit and finds the Sindarinia of the Rangers amusing.

As always, pop cultural references and homages are slipped in with a subtle wink, and this time Lucifer's Hammer, South Park, and (long overdue) Highlander all get nods.

Third: yes, fellow papists, the "Catholic stuff" remains in good hands. And no, not mine. I'm reviewing that stuff, not writing it. A lot of times my input is a Jared Cofflinesque "Ayup." Leavened with my trademark verbosity, natch.

Finally, if you read closely, I think you get a clear-enough explanation for why the Change happened. Who and how remain in the time-honored "heh, heh" category.

It's a classic "middle book," so it is unsatisfying for the usual structural reasons. But the geographical range helps make up for that, and we finally see the one place in North America where the shock of the Change had the least impact, fabled and fabulously wealthy Iowa. The book closes with Frodo heading over the Andu---Rudi crossing the Mississippi into the biggest deadzone of them all, determined to right a wrong and continue the quest.