I hate to do the multi-parter thing again so soon, but this one is important, and requires it.

There are times, in Catholic life, when one stumbles across something so gobsmackey that you have to read it twice and walk away to enjoy a relaxing stroll through the autumn sunshine. Then, you return and read it again to make sure your eyes and brain had not, after all, decided to go on a general strike together. To your immense discomfort, you realize you read it correctly the first time.

This presentation by Oscar Andres Rodriguez Cardinal Maradiaga of Honduras is one of those times. Maradiaga is no ordinary prince of the Church--he has been appointed as coordinator of the Pope's "Gang of Eight" which is spearheading reform of the Vatican's bureaucracy.

Which means, naturally, that we should employ a lens of charitable presumption, assuming the best even in presentations which are clearly not ad hoc Night At The Improv oops-I-brainfarted-again gaffery.

I came up snake eyes. Unless the Cardinal is a prankster whose comic touch extends to preparing and lighting bags of modernist poo on the doorsteps of Catholic ministry folks and university students the week before Halloween...in which case--Zany! 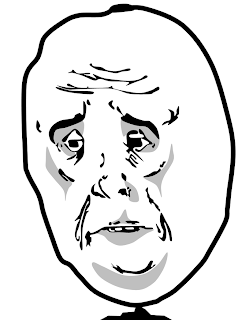 No, this one is a humdinger, and needs to be explored closely.

THE IMPORTANCE OF THE NEW EVANGELIZATION
Cardinal Óscar Andrés Rodríguez Maradiaga SDB
Archbishop of Tegucigalpa
University of Dallas Ministry Conference
Irving Convention Center
25 October 2013
The title is rather interesting, because as you will see it's not exactly clear, in light of the entire presentation, where evangelizing fits in. No, really, it's that bad. Despite citing them, the Cardinal untethers himself completely from the documents of Vatican II and seems to use the conciliar spirit as a sort of ecclesial feng shui, an astonishing effort to harmonize the Gospel with the world.

Which is a shame--and then a horror--because it gets off to something of a good start. With one caveat.

1. Introduction: It is not possible to talk about the Church, or about the Church today, without referring to the crucial moment in contemporary history that Vatican II has been for her, both as an event of grace and a paradigmatic reference.

During a pre-conclave speech, the then-Cardinal Bergoglio issued a warning about what happens when the Church becomes "self-referential." While Cardinal Maradiaga would no doubt disagree, his speech is loaded with one of the more common self-referential sins of modern Catholic churchmen: the endless appeal to the 21st ecumenical council.

Some of you are probably crying foul, itching to throw a yellow flag, but think about it--how do you think constant, self-praising references to Vatican II sound to non-Catholic ears?

"We gathered together, thought and talked about the modern world for three years and bam--I tell you! Wow, it just hit us! Now we know how this utterly unique and unprecedented modern world thing works! We even prepared several mission statements! Minds. Blown! Let me tell you humbly--it's the most important event in our recent history, and we are just brimming with insights from our big meeting that we just gotta share! Let us hit you with some knowledge. Incessantly."

Note that he says it is simply "not possible to talk about the Church" without referring back to it. And, my, does he ever refer to it. Over and over and over again. Let me humbly submit that constantly talking about your fabulous insights seems to be the dictionary definition of self-referential.

The Church is rising. There is a significant increment of the faith in Africa, where the Church has grown tremendously during the 20th century. Such vitality can also be seen in some sectors of the Church in Asia –in India, Vietnam, the Philippines. But, at the same time, we are seeing in Europe institutions of considerable size but little energy, as well as a very hostile culture, fed by secularism and laicism. At the same time, we are watching a continent that “is committing demographic suicide at an alarming pace.” Similarly, here, in the United States of America, not everything is gloom, not everything is scandal and sin. No. Here, the Gospel of Christ is also alive and effective. For instance, George Weigel assures us in The Courage To Be Catholic: Crisis, Reform, and the Future of the Church (Basic Books, 2000) that, 200,000 people embraced the Catholic faith in the United States in Easter of 2002, a number that for us is cheerful, and optimistic, and “a vital sign.”

A fair assessment. Perhaps a little over-optimistic, but fine.

2. Vatican II
The Second Vatican Council was the main event in the Church in the 20th Century. In principle, it meant an end to the hostilities between the Church and modernism, which was condemned in the First Vatican Council. On the contrary: neither the world is the realm of evil and sin –these are conclusions clearly achieved in Vatican II—nor is the Church the sole refuge of good and virtue. Modernism was, most of the time, a reaction against injustices and abuses that disparaged the dignity and the rights of the person. 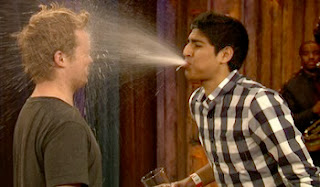 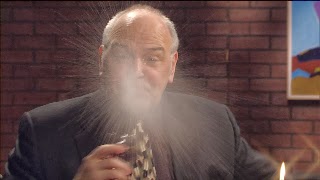 Well, that certainly is....

Holy hopping snot. I can't make sense of it, at least not without a friend employing some herbal assistance. 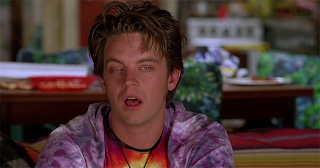 "No, dude, it totally makes sense. You see, the Church and modernism are like oil and water, but if you have, like, God's totally ultimate hand mixer, you could make a kind of oil and water vinaigrette without, you know, vinegar. Just like that water-burning car the oil companies are hiding from us, man. Hey? Where are the Cheetos?"

3. If anyone says that it is possible that at some time, given the advancement of knowledge, a sense may be assigned to the dogmas propounded by the Church which is different from that which the Church has understood and understands: let him be anathema.

As StrongBad might say, "I'm no theologist, but I think 'anathema' is bad."

And, if I may be so cheeky, let me point out what modernism meant to the Saint who decided to brain it:

Still it must be confessed that the number of the enemies of the cross of Christ has in these last days increased exceedingly, who are striving, by arts, entirely new and full of subtlety, to destroy the vital energy of the Church, and, if they can, to overthrow utterly Christ's kingdom itself.

Soooo...Vatican II was an armistice with the enemies of the cross of Christ? Who were just poor ol' misled social justice crusa--er, collaborators trying to make the world a better place?

No no no. NO. Modernism is better thought of as an attempted palace coup against God Himself, staged within the Church herself. Sure, all revolutions cloak themselves in good motives, in terms of justice. That doesn't justify them, much less their tactics.

Oy, vey. One fears that the Cardinal is writing Anthony Cekada's ad copy for him. Really, there's no salvaging this--it's a clusterfark. If the Cardinal's argument is accepted, the Church isn't descending into a hermeneutic of rupture. It's worse than that--it's a hermeneutic of malleability, with Vatican II the funhouse mirror-shaped lens used to examine Tradition.

And then burn it like ants on a sidewalk.
The Vatican II Council officially acknowledged that things had changed, and captured the need for such a change in its Documents, which emphasized truths such as these:
Is that what the Council officially acknowledged--that modernism had a lot  of really, really good points? Turning previous councils like Vatican I on their head?

Since the Church is in Christ like a sacrament or as a sign and instrument both of a very closely knit union with God and of the unity of the whole human race, it desires now to unfold more fully to the faithful of the Church and to the whole world its own inner nature and universal mission. This it intends to do following faithfully the teaching of previous councils. The present- day conditions of the world add greater urgency to this work of the Church so that all men, joined more closely today by various social, technical and cultural ties, might also attain fuller unity in Christ.

Emphasis added even though it shouldn't have to be.

So, we're just jettisoning the documents and winging it now, I guess? Vatican II: I'm OK, You're OK.

1º) The Church is not the hierarchy, but the people of God. “The People of God” is, for the Council, the all-encompassing reality of the Church that goes back to the basic and the common stuff of our ecclesial condition; namely, our condition as believers. And that is a condition shared by us all. The hierarchy has no purpose in itself and for itself, but only in reference and subordination to the community. The function of the hierarchy is redefined in reference to Jesus as Suffering Servant, not as“Pantocrator” (lord and emperor of this world); only from the perspective of someone crucified by the powers of this world it is possible to found, and to explain, the authority of the Church. The hierarchy is a ministry (diakonia = service) that requires lowering ourselves to the condition of servants. To take that place (the place of weakness and poverty) is her own, her very own responsibility.
The Suffering Servant is one of my favorite images of Christ. However, it is far from the only valid one. It's not, as anyone with a fleeting grasp of the New Testament can admit. Christ Pantocrator arose out of that NT datum that He is Lord. Also, that the wind and waves obey Him. That at His Name, every knee is to bow. That He is the Son of Man.

And Christ Pantocrator--Christ the King--was--and is--a handy reminder to those who hold power, from Emperors all the way down to drain commissioners, that they answer to a King who stands over all. One who expects them to do justice to all.

The examples can be multiplied--I mean, I haven't gotten into the really heavyweight stuff in John. But the point remains--a vision of the Church based on only one facet of Jesus is going to be an impoverished and distorted one. Yes, I want ordained deacons, priests and bishops to serve, but I also expect them to rule when necessary--as did Jesus. The Holy Spirit gave us four gospels, with a plenitude of images of Christ and the Church. Why fixate on only one? Be all things to all men, so that you might save some, as a wise man facing a world of multiple beliefs--and no beliefs at all--once said.

Email ThisBlogThis!Share to TwitterShare to FacebookShare to Pinterest
Labels: End of Exile, Fisks