How about our lives?

We went up to visit our parents for Christmas this year, as my sister-in-law came up with the inspired proposal to get the three Price households together for perhaps the last time for the next several years (my brother works in Washington State, and we don't know where he'll be assigned to next). So, we went up on Thursday, had a great time, watched the five kids fill the air with wrapping paper confetti and came back on Christmas Eve.

It also meant reduced sleep for me, so I passed off control of the Family Assault Vehicle, heavily laden with children and children's loot, to Heather.

We were about here 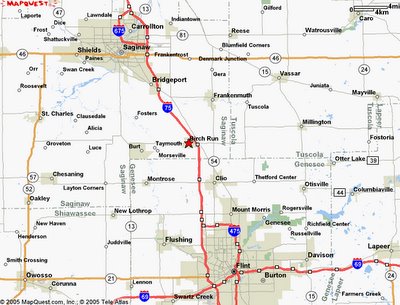 on southbound I-75 at about 3:00pm when Heather started to make a lane-change on an overpass. Unfortunately, there was a car in our blind spot, and Heather swerved back into the center lane.

Or tried to. That's when I woke up. Fully. The road was wet. Not icy, but it might as well have been.

The Venture started fishtailing--badly--at 70 mph. We swerved into the right lane, heading toward the fence as Heather tried to steady the vehicle and slow us down. No good. We started to hydroplane.

The minivan began to spin slowly but surely in a clockwise direction. In a seeming instant we were facing northbound but still moving to the south. We were slowing down, yet still spinning. We faced east, and then hit drier pavement, arresting the spin and, mirabile dictu, leaving us facing southbound again, and in the center lane. Stalled out.

But otherwise unharmed. The traffic behind us, despite being beguiled by the show (I will likely recall the expression on a middle-aged woman with glasses for as long as I live), had managed to slow down in good order, and passed us at a relative crawl. Nobody else even so much as left the road. Heather managed to get the van over to the side of the expressway and stopped shaking a few minutes later. I am morally convinced that I couldn't have done any better, and quite probably would have done worse, than she did. Our children were shaken, but since we didn't freak out, they didn't. In fact, Dale now seems to think it was great fun and would like to try it again. [Memo to self: he can have a Segue when he turns 16 and like it.]

The wonder of it is that absolutely no harm was suffered by anyone. We could have hit another car or cars, spun right off the steep overpass embankment or even hit the drier pavement at the wrong time and gone into a barrel roll, with all of the stuff our van was crammed with going flying about and hitting the kids.

So, no, it's not technically miraculous, it just feels that way.

Oh, and by the way: my sister-in-law gave me this visor clip for Christmas. It's staying in the van, if you are curious: