There are times when I can do a convincing impression of the incarnate wrath of Almighty God.

A good friend of ours told us about a costume she saw for Halloween. She was in shock--it was a French maid costume, for little girls. As in pre-school girls.

She's not one to exaggerate--her blog is here--but really? That bad? 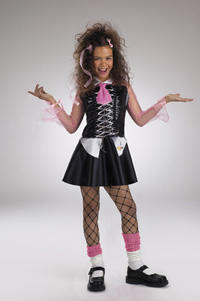 What soulless sacks of anything-for-a-buck dogshit thought this one up?

Why, the same responsible corporate citizens who bring you Bratz, of course.

Just when I thought it was impossible for the adamantine cyst of hatred in my heart for the entire hellish enterprise to grow any larger... Really, a boycott is now in order. Nickelodeon and Noggin, what say you?

Forget what I said at the first Bratz post--you are a bad parent if you tart your daughter up in this "costume." The best thing I could say for you is that you are an abject moral idiot of epic proportions. The worst would be a stream of expletives worthy of an episode of Deadwood.

All I can do is protect my own, and fortunately, my kids are learning. If for some reason I don't happen to notice a commercial for the skankdolls coming on, Maddie will yell: "Daddy--Bratz!" Which is followed by 30 seconds of any form of inoffensive alternative viewing, including test patterns.

For the record, Maddie wants to be a butterfly for Halloween, Dale is going as Bob the Builder, and Rachel is going as a ladybug (her intentions being unclear and the ladybug costume being the best fit). And the parents of kids who show up in Bratz paraphenalia on Halloween will be chased down the street by me, dressed as a torch-and-pitchfork-wielding outraged mob.

Email ThisBlogThis!Share to TwitterShare to FacebookShare to Pinterest
Labels: Culture, National Tart Up Your Daughters Day