A decidedly un-fantastic four overturn altar in a Catholic church during Mass.

Ringleaders are solid Christian folk in a common-law marriage. 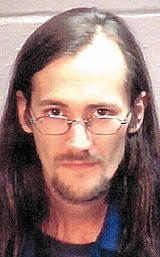 "It's the end times, man. The Pope's the antichrist. And while we're opposed to all forms of 'man-made religion,' we'd have gotten killed pulling this stunt in a mosque."

Certain tidbits from the second article are interesting:

Turgeon said his group went inside the church, listened to prayers and watched parishioners take communion before the outburst.

"It was so monotone," Turgeon said. "There was no passion, fire, reverence."

The man turned over the church's century-old marble altar, sending it tumbling down the steps.

I don't know about you, but I think the defense practically leaps off the page: Mr. Turgeon & Friends were obviously recent attendees of some nearby liturgy conference and were simply trying to put into action some of the principles they had learned. Their mistake--if it can be so harshly described--was the fruit of overenthusiasm, an understandable can-do spirit. They simply did not know the right way to go about things, so why is everyone so worked up? Century-old altars get shattered all the time. It would be a manifest injustice to punish a group of admittedly over-eager renovators.